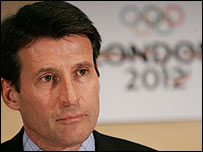 Lloyds TSB was today formally announced as the first domestic sponsor of the London 2012 Olympic and Paralympic Games in a deal worth around Â£80 million.

The money from the sponsorship will go towards the Â£2 billion running costs of the Games, with other category sponsors expected to be announced through the course of the year, as London organisers seek to raise close to Â£750 million from their own partnership deals.

“It’s a big moment in the life of a host city,” said Lord Coe, the chairman of the

“Winning it is pretty important, but there are fewer bigger moments in the lead-up to the opening ceremony than bringing your first partner to the table.”

Lord Coe said up to 10 “tier one” partners, such as Lloyds TSB, will be appointed, which should raise up to Â£500 million, with around Â£250 million being made up by the “tier two” partners. One-third of the staging costs will come from the IOC as a share of telvision revenue, and the rest of LOCOG’s necessary income from ticket sales and merchandising.

Lloyds TSB will also work with London 2012 on the sale and distribution of tickets for the Olympic Games and Paralympic Games when they go on sale in 2011.

“We are very proud to be the first organisation to become a domestic partner of the London 2012 Games which will probably be the most important event to take place in Britain in our lifetime. Over the next five years, we will work with our staff, our customers and our local communities to help make 2012 the most inspiring Games ever.”

Eric Daniels, the chief executive of Lloyds TSB Group, said: â€œThe 2012 Games represent a unique opportunity to create a lasting legacy for sport and youth in this country and we are proud to be associated with it.

“Every day, our staff work with customers to help them realise their goals and aspirations, and in many ways, that is what 2012 is all about.

“Over the next few years, we will work with local communities to help our athletes achieve their dreams and to inspire young people throughout the UK.â€

London 2012 chief executive, Paul Deighton, said: “London 2012 is a once in a lifetime opportunity for businesses in the UK to access the powerful benefits associated with staging the Olympic and Paralympic Games.

“The commercial value of a London 2012 partnership will be realised long before the opening ceremony in 2012, and can be sustained as a legacy for decades after the final race is won.

“We look forward to working with Lloyds TSB to stage the best possible Olympic Games and Paralympic Games, inspiring young people and leaving a legacy of new community facilities and benefits for the next generation.”

Lloyds TSB will use its partnership with London 2012 to involve its customers and the community in the unique excitement of the Games experience.

Lloyds TSB will focus on two key areas: youth and bringing the Games to the wider community.

A range of partnership programmes in both of these areas will be developed over the coming months.

Using cutting edge technology, LOCOG and Lloyds TSB are working together on a programme of Live Sites, including big screens and performance spaces that will connect communities up and down the country with the Games.

Lloyds TSB plans to integrate the sponsorship into all of its businesses and the London 2012 Olympic and Paralympic Games will be closely aligned with its brand campaign, ‘For the journeyâ€¦’.

As the Bank works to helps customers to get to where they want to go in life, so it will be supporting athletes in their quest to fulfil their aspirations.

Since formation in 1987, the Lloyds TSB Foundations have made grants totalling over Â£300 million to grass roots charities throughout the UK.

SJA members can get a 20 per cent discount on subscriptions to insidethegames’ e-mail alert and news service – worth Â£50, or more than twice the cost of your SJA annual subscription, and delivering hard Olympic news stories to your inbox every week. Click here for more details.