Jack Lemley, the American who walked out as chairman of the 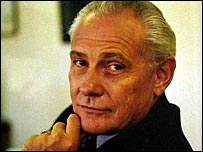 Olympic Delivery Authority last year, did so with a payment of more than Â£600,000 for 10 months’ worth – or the cost of the London Games’ unloved new logo, plus 50% again.

The details of the pay-off to Lemley (pictured right) – including Â£388,000 in “compensation” plus Â£58,000 in expenses – were revealed for the first time in the ODA’s annual report, published earlier today. The payments to multi-millionaire Lemley immediately drew harsh criticism from politicians in City Hall.

“This is an absolute scandal and disgraceful waste of taxpayers’ money,” Dee Doocey, the LibDems’ London Assembley Olympics spokesman, said. “We were told by the ODA in October last year that Jack Lemley resigned his post of chairman to return to America and pursue his business interests. Yet today we learned he was paid off with a handsome package of almost Â£400,000. This raises serious questions as to whether Mr Lemley jumped or if he was pushed.

“There are also question marks as to why Mr Lemley, who was said to be earning Â£120,000 a year for a two-day week, has ended up walking away with over Â£600,000 of taxpayers’ money after only 10 months in the job. All this must be seen against the background of the Olympic budget having quadrupled in the last a year. ODA chiefs must as a matter of urgency come and explain to Londoners how this shameful mess was allowed to happen.â€

his agreement, though comments critical of the London Games which he made to his local newspaper on returning to the United States, although no official action has been initiated on this.

Publishing it’s annual report, the ODA pointed to its first-year progress, including submission of the planning application for the Olympic Park and completion of the first major construction project.

“This is a project without precedent – twice the size of Heathrow’s Terminal 5 in half the time,” ODA acting chairman Roy McNulty said in a statement.

“It is one of the biggest business challenges in the world and one of the biggest jobs in the construction industry – a multi-billion pound delivery programme to a fixed deadline. The ODA has met all its major milestones to date in its first year, finishing the first major construction programme, the tunnelling needed to put the power lines under ground, on time and to budget.”

McNulty, who will step aside for new chairman John Armitt in September, also said improvements to the site map had resulted in a Â£600 million saving for the project.