From insidethegames.com
Lloyds TSB, the first company to sign up to be a tier-one domestic sponsor for the 2012 Olympics, 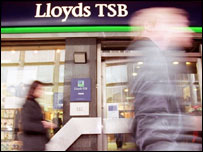 has begun advertising in national newspapers to publicise their Â£80 million link with the Games. Industry insiders are predicting that they could soon be joined by Budweiser as a multi-million pound sponsor.

Sources have told insidethegames that LOCOG has now carried out numerous discussions with international and domestic beer brands and are close to concluding a deal with Budweiser. Budweiser has been an Olympic supporter since 1984 when the brand was the official beer sponsor of the Olympic Games in Los Angeles.

The Olympics in Britain already has close links with Budweiser as its parent company, Anheuser-Busch, the worldâ€™s second biggest brewer, is a partner of the British Olympic Association and will back Team GB at next yearâ€™s Beijing Olympics through its Michelob Ultra brand.

announced by LOCOG but is set to be added, along with postal services which is expected to be awarded to the Royal Mail. Another sponsor thought to be close to agreeing a multi-million deal with LOCOG is BT for the telecommunications category.

With Lloyds TSB having paid Â£80 million to be the banking sponsor, the other categories
seeking sponsors are utility services, insurance, sportswear, airline, automotive and oil and gas.

Lloyds is still discussing its marketing strategy leading up to next yearâ€™s Olympics â€“ its deal with London also sees it become a sponsor of the British Olympic Association Team GB â€“ but adverts did appear in some Sunday newspapers. Under the strap line â€œWhich bank is a proud sponsor of the London 2012 Olympic Games?â€ it claims that its sponsorship is more â€œthan just a sporting gestureâ€ and that it will be supporting young sportsmen and women from across the country in
the run-up to the Games.

SJA members can get a special reduced subscription to insidethegames.com‘s service of daily e-mail alerts and weekly newsletters on preparations for the 2012 Olympics. Click here for more on member benefits