PHILIP BARKER reports from Athens and the latest Olympic flame ceremony, as London takes possession of a miner’s lamp in a rain storm

From the moment we got here, Greek journalists had one question: “Is Beckham coming?” perhaps they hoped he might bail their nation out of its economic woes.

The last time Greece encountered Beckham, it was to bend that free kick round the wall at Old Trafford in 2001, but it appears that they’ve all forgiven him for that.

The reception he received was appreciably louder than the Greek president or even that for HRH The Princess Royal or Boris.

With or without “Goldenballs”, the ceremony at the Panathinako stadium – where the 1896 Games were staged – was always going to be a major production number, though no one had expected the drenching downpour, especially as the preceding day had been the archetypal perfect summer’s day.

As storm crowds rolled in, most of the British press pack sheltered under the giant umbrella provided for BBC Television. BBC News 24 and BBC2 both carried live coverage, and radio reporter Gordon Farquar also described the scene for the Drive time audience. 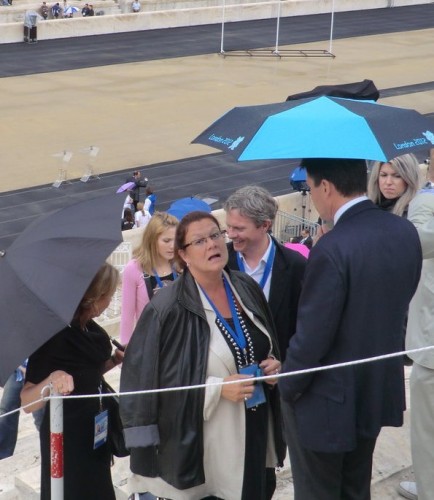 Local TV host Alexis Kostalas did the announcing duties in the stadium. He’s the man who gives the result of from the Eurovision Song Contest from Athens. He introduced “Sir David Beckham” to the crowd, which caused mirth among the British press.

Chinese Gymnast Li Ning was one of the final torchbearers in Greece, though unlike his moment in Beijing, this time he kept his feet firmly on the ground. He was joined by the nearest thing Greece has to Beckham, triple gold medallist Pirros Dimas , a weightlifter who carried the Greek flag at the 2004 Athens Games.

There were speeches from Lord Coe and Spyros Capralos, president of the Hellenic Olympic Committee, who probably felt his sporting career as a water polo player had come in handy in such wet conditions.

The crowd milked the appearance of those wonderful priestesses, led by classical actress Ino Menegaki. Like that in Olympia, the ceremony was simple and dignified .

The flame had spent the best part of a week on Greek soil and was even taken to the Turkish border. The symbolism wasn’t lost on anybody.

For the most part, access to the media was open, though journalists were excluded from the ceremony at the Parthenon when a cauldron was lit to celebrate the arrival of the flame in Athens.

The Princess Royal, sports minister Hugh Robertson and the London Mayor were there, though for once Boris did not pause to declaim at the foot of the Acropolis. He made up for it in the stadium, when he went live on BBC television and radio.

There had been one heart in mouth moment at the Port of Piraeus. Elias Rosidis, an Olympiakos player of the Finney and Matthews vintage, carried the torch into the town square. He’s 84 and the crowd let out a collective gasp when he tripped as he crossed the stage. Thankfully he was very soon on his feet, and what’s more the flame was still alight.

The flame heads to Land’s End to begin a 70-day relay around the British Isles on Saturday morning. Ben Ainslie begins the run and as the Champions League final kicks off, SJA member Barry Davies will carry the torch in Plymouth. He’s been nominated by the IOC for his sterling work in covering the Games in a broadcasting career of more than 40 years.

He’ll be commentating on the hockey again in London for the Beeb, hoping for a repeat of the miracle at Seoul in 1988.