NORMAN GILLER went for a stroll down memory lane, and stumbled into an Olympic Games. Plus a glimpse into KEVIN MACEY’s sketchbook 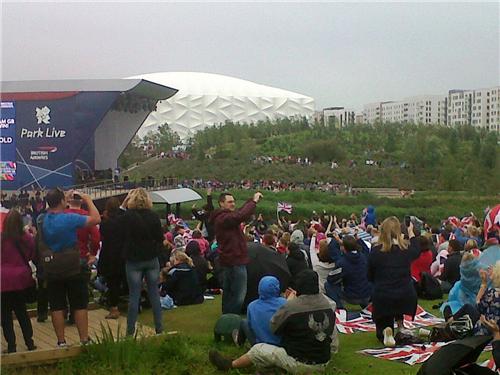 It went unreported yesterday that an old man made a complete prat of himself in the Olympic Park, jumping around like a demented frog in front of the giant screen as he celebrated Great Britain’s first gold medal of the 2012 Games.

Uh, I confess that it was me.

I had a special rover ticket so that I could try to capture the atmosphere of the park and it turned out to be one of the most emotional days of my sports reporting life.

To set the scene, you need to know my Stratford connection. It was 55 years ago that I started out on my journalistic career just half a mile from where the 114-metre-tall Orbit now stands like a real eyeful tower.

I was a reporter and then sports editor on the local Stratford Expess, sadly long gone to the newspaper graveyard. It was in Stratford where I spent the first five years of my 45-year married life, and where my two children were born in the Swinging Sixties and in the same hospital as a certain Lennox Lewis.

The definition of an old man? When you have a 50-year-old daughter, the milestone my little princess, Lisa, reaches on Sunday.

I have avoided Stratford since it was chosen as the home for the Olympics, because there are too many buried memories and ghosts of loved ones past. I just could not get my head round that run down area of east London being the right and suitable setting for the greatest sports show on earth.

So it was with trepidation that I accepted the invitation to spend a day at the Olympic Park. What a day.

The atmosphere was nuclear from the moment Heather Stanning and Helen Glover, glided to an historic (and for me, hysteric) victory in the women’s pairs at Eton Dorney.

Watching it live, we had been whipped into a frenzy of hope and expectation by the man at the microphone, Matthew Lorenzo. I literally gaped when I saw he was the MC, getting the thousands-strong audience in the mood to cheer home the H-for-heroine girls, Heather and Helen.

I have known Matt since he was knee-high to a space hopper, and he and his late father, Peter, and I used to run a PR and promotions agency together. We were the powerhouse think tank behind the transitory Texaco Cup and the pioneer pub quiz, What’s Yours?

It all adds to the nostalgia ingredients of this story, because Peter also started his sports reporting career on the Stratford Express.

Matthew, in my biased view better than most of the presenters on parade for the BBC, is these days an energetic freelance corporate host and runs a media-training company. Yesterday, he worked with the most enthusiastic and happiest audience I have ever seen at a major sports event. 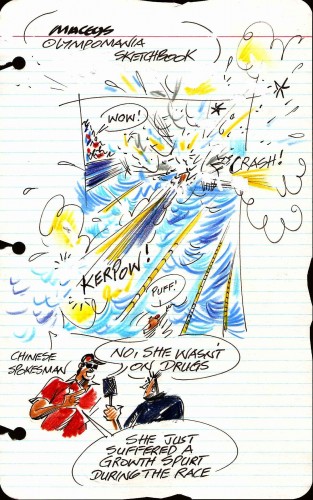 There are three major reasons that the Olympic Park is – despite my fears – a huge success: the magnificent stadiums, the welcoming army of volunteers who make everybody feel as if they are part of the Olympic family, and most of all the public, who are in party mood from the moment they enter the enormous and awesome venue.

They have truly got the Olympic spirit, and come rain (lots and lots of it) or shine, they are determined to enjoy it.

The cheers that greeted the time trial gold of “Sir” Bradley Wiggins could, I am sure, be heard at the other Stratford (on Avon). The Bard could not have made up what has happened to Brad.

I cannot think of an individual achievement by a British sportsman to equal his Tour de France/Olympic double in a matter of weeks. Wonder who will get Sportsman of the Year?

As Wiggo whizzed home, the Olympic Park suddenly became like the scene of a giant carnival, perhaps setting the tone for Rio in 2016. We were in agreement that a major royal should have been drummed up to make the medal presentation, particularly as it was at Hampton Court. The IOC got that one wrong. Off with their ‘eads!

The downsides at the Olympic Park were the rip-off prices in the stores and at many of the food outlets (£6.20 for a chicken sandwich and tea in a cardboard cup), marathon walks between the major attractions, and the aggravating sight on the huge screen of empty seats while we were told there were no tickets available.

But there were few complaining yesterday because, at last, there was a bright golden haze on the Stratford meadows.

What concerns this old git, with in-depth knowledge of Stratford, is what is going to happen when the party leaves town?

I just don’t see how those dozens of Knightsbridge-style shops are going to be sustained, and there is as much chance of the promised “affordable housing” for the poor people of the borough as Boris Johnson becoming a high-wire walker.

But I must not end on a Victor Meldrew moaning note. Former Times, Evening Standard, Daily Mail sports editor and Sporting Life chief Tom Clarke, one of my two regular readers, has told me off for being too much of a cynic and pessimistic about the Olympics.

What I discovered yesterday on my Stratford Revisited day out was that regardless of what groaning old farts like me and all media critics say, the great British public are embracing the Olympics with the enthusiasm, enchantment and enjoyment that they deserve.

I can yet see a statue to Seb Coe being built in the Olympic village in recognition of his industry and vision.

That would be worth going back to Stratford to see.