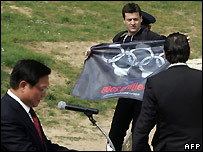 Protesters unfurled black flags bearing handcuffs in the shape of the Olympic logo to interrupt the ceremony as the Olympic flame was lit today in Ancient Olympia.

The protest, over China’s continued presence in Tibet, is certain to create greater concerns over security when the flame comes to London early next month as part of its global tour en route to Beijing for this year’s Games. Human rights groups are thought likely to try to use the event to protest China’s part in the strife in Darfur as well as its occupation of Tibet, where protests have led to more than 100 deaths in the past three weeks.

Today, the two protesters broke through a security cordon of more than 1,000 police during a speech by Liu Qi, the president of the Beijing Olympic Organising Committee. Both men were arrested by Greek police.

Jacques Rogge, the president of the International Olympic Committee, said, “Events in Tibet are a matter of great concern to the IOC. The IOC has expressed the hope that this conflict could be resolved as peacefully as possible.

“We believe China will change by opening the country to the scrutiny of the world through the 25,000 media who will attend the Games.”

on its route to Beijing.

The Olympic flame is no stranger to controversy. The Olympic torch relay, far from being a relic of the ancient Games, was in fact introduced as part of the pre-Games theatre by the organisers of the notorious 1936 Berlin Olympics.

In 1984, the Greek authorities threatened to withhold the flame as a protest against plans to sell the rights to carry the flame in the United States.

Before the 1948 London Games, the route of the relay had to be altered to avoid the civil war in Greece and the British press carried editorials criticising both the flame and expenditure on the Games themselves.

The 2008 flame was lit from the rays of the sun in the ruins of the temple of Hera in Ancient Olympia. The part of high priestess was played by classical actress Maria Nafpliouto, performing the role for the first time. The first runner, 6ft 7in tall taekwondo silver medallist Alexandros Nikolaidis, began the long journey.

After a week in Greece the flame begins the longest journey in Olympic history. It arrives in London on April 6, where Dame Kelly Holmes and Ashes hero Kevin Pietersen are among the torch bearers.