James Lawton, in The Independent, on the writing of an autobiography with a football icon

We were somewhere over the mid-Atlantic when Sir Bobby Charlton, who was quite by chance in the next seat on the flight from Chicago, turned to me and said, “Oh, by the way, I’ve been making some notes for the book.”

Perhaps a little coyly â€“ because on the grapevine I had heard that he had suggested to a publisher that I might collaborate with him on the autobiography many believed he would never write â€“ I asked “which book?”

If I said it with a little catch of the breath it was because I wanted the rumour to be true, in some ways as much as anything in my professional life, but if there was desire there was also apprehension. It redoubled with his confirmation that indeed he was asking me to travel with him back through a football life that mingled glory and pain to a greater degree, in my opinion, than that of any of his contemporaries. The need to make it a real book, containing the real Charlton, was only confirmed on the flyleaf when it was published this week.

There, lifting the bar a little more with that demand to help do justice to arguably the most admired English footballer

the world has ever known, and recognised so spontaneously in some of its its most obscure corners, were the opinions of three men who knew him so well at different stages of his life as one of only two Englishmen (Nobby Stiles is the other) to win both the World Cup and the European Cup.

First was the comment of John Giles, a team mate and fervent admirer in the Manchester United team which in 1963 won the FA Cup â€“ the club’s first trophy since the Munich tragedy five years earlier. He declares, “His story is the best in English football. After Munich he was the hope of both Manchester United and England and he carried the burden brilliantly.”

Sir Matt Busby, for whom Charlton was the fulcrum of the third great United team he made in the space of 20 years, is quoted in similar fashion, but from the perspective of a manger whose genius was to recognise both character and talent. He said, “The greatest thing for a manager is to trust the talent. Bobby Charlton never betrayed that trust. It was a privilege to have him play for you.”

A little uncannily, Busby’s ultimate successor Sir Alex Ferguson, for whose appointment Charlton, by now a United director fought for fiercely when the club parted with Ron Atkinson in the mid-eighties, says, “Bobby Charlton’s career was miraculous.”

“One privilege heaped upon another”
Uncanny, maybe, in that Charlton’s first words in the recall of a stupendous football life read like this, “Now, when I look back on my life and remember all that I wanted from it as a young boy in the North East, I see more clearly than ever it is a miracle. I see one privilege heaped upon another. I wonder all over again how so much could come to one man simply because he was able to do something which for him was so natural and easy, and which he knew from the start he loved to do more than anything else.”

There is the essence of Charlton, the man and the footballer. But then, like most other people, he learned quickly enough that there is a time when you have to put away a lot of the dreamy romanticism. The story of Charlton, and the character he retains as he approaches his 70th birthday, is suffused with that early joy that came to him as he played football as a boy, driving the ball low and sweetly through the wind, and which was so soon augmented by the certainty that he would join such heroes as Stanley Matthews and Len Shackleton on the professional field.

However, the pain, so acute it can still touch him, he reveals, at any time of day or night, was swift in coming. When he lost eight team mates at Munich, when he saw them laid out in the snow, when he occupied a hellishly surreal tragedy, when he stooped to place his overcoat on the stricken figure of the great Busby, when a young German boy in the next hospital bed later read from a newspaper the list of lost football heroes, “and my dearest friends, who were like brothers,” he knew that the certainties of his life were gone for ever.

It didn’t take so many of the hours we spent together to realise why he had waited so long to tell his story, so much longer than, say, Wayne Rooney or Frank Lampard or David Beckham. It was because the telling of his story required Bobby Charlton to confront the most persistent demons.

As he put it in the opening pages of his book, “It would be possible to list a thousand good things that 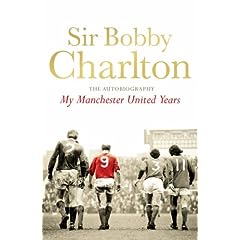 have happened to me before I deal with the moment I regained consciousness and faced that scene at the airfield. But I know I couldn’t begin to define my life before going back there.”

The best ambition of a collaborator in Sir Bobby Charlton: The Autobiography : My Manchester United Years (Headline) is that the real man emerges, the real Charlton of blood and strong passion, but also one who understands how the world, and football, works, who can talk of how George Best could both delight and enrage him and, when all that is put aside, can describe the depth of his sadness when he walked with Denis Law away from a last, death-bed meeting with the beloved rebel who had coloured so vividly some of the best of their days.

You cannot flick one page, or one tape recorder button, and find an easily accessible Bobby Charlton.

You try to build, piece by piece, the image of the man from a youth which he found in so many ways idyllic, despite the hardships of the North East, the visits to the pithead with his father Robert, who was at times scarred and battered from his work in Ashington colliery, to collect much needed wages, the visits to Newcastle and Sunderland football grounds with his brother Jack, and the rapture when his famous mother Cissie cooked a rare rabbit caught by the family’s lazy whippet.

A collaborator’s job is to take an author to places he is least eager to visit but if it pained Bobby Charlton, sometimes to the point of tears, to re-visit Munich and to discuss the family difficulties which came with a breakdown in relations between his mother and his wife Norma, and the public partisanship of his brother Jack, he accepted that these were matters he could not ignore, not if he was to try to tell the story of his life rather than produce some veneer beyond which it would be impossible to scratch.

The result, I hope, is the candour of a man’s nature and soul, if not every detail which he believes is not solely his to divulge.

This is an abbreviated version of an article published in The Independent on Friday. Click here to read the article in full.

James Lawton is an award-winning SJA member, having been named Sports Columnist of the Year at the 2005 SJA Sports Journalism Awards and Feature Writer of the Year in 2006