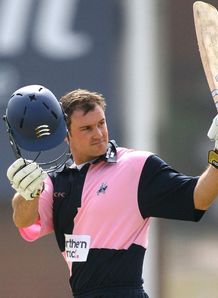 The appointment of Andrew Strauss as England cricket captain marks a remarkable transformation for a man who 12 months ago was out of the team doing charity appearances with the country’s rugby writers, as BARRY NEWCOMBE reports

There is every chance that a small group of rugby writers will be more than pleased that Andrew Strauss is the new England cricket captain.

Back in November 2007, when Strauss had been omitted from the next England tour to Sri Lanka, he still turned out for a fun day at the indoor cricket school at Lord’s when the guests were rugby writers and some of the England rugby players.

Alex Spink, from the Daily Mirror, did the damage to Strauss.

He remembers: “Andrew had just been dropped and left out of a tour and I bowled him off stump with a neck and crop inswinger.

“I don’t play cricket very often now, the rugby writers have two matches a year usually at Twickenham Green against the Rugby Union and the Professional Rugby Players’ Association and that is it.”