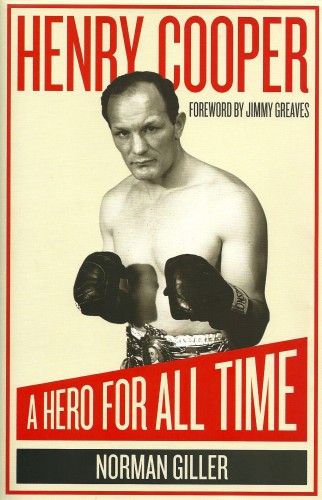 The latest book off the Norman Giller production line is a real knock-out, says ANTON RIPPON

Norman Giller will never forget the first time he met Henry Cooper. Not many people would forget the first time they came face to face with Our ’Enry. But on that freezing December morning in 1958, the young reporter from Boxing News presumably tried to keep his gaze fixed firmly upon the face of a heavyweight challenger who was wearing nothing but a pair of heavy-duty size-11 army boots.

Cooper was in training for his fight against the British and Empire champion, Brian London, and superstition meant that he always put his boots on first. “Watchyer, Norman,” he said, extending a hand. And a lifelong friendship was born.

The story of that friendship is a theme to Henry Cooper: A Hero For All Time, Giller’s 94th book (or at least it was when he delivered the manuscript; he’s probably knocked out a couple more since then) and his fourth about Cooper.

The others covered Cooper’s choice of 100 greatest boxers, his most memorable fights, and a coaching book. This one was meant to be an autobiography, with Giller as ghostwriter. Alas, it has to be a biography because one of Britain’s national treasures passed away last year before work could properly begin on the original plan.

In a way, though, it is still part autobiography because Our ’Enry’s voice rings true through so much of it, thanks to lengthy quotes that Norman filed away from so many conversations with his pal over the years.

Early on, Norman sets the scene for those words with a beautifully constructed reminder of the way that Cooper spoke: “a rhythmic way that you could have set to a snare drum accompaniment … a staccato run of sentences with a sign-off ‘yeah’, like a cymbal crash from a percussionist.”

There is also an early introduction to “the Bishop”, Cooper’s larger-than-life manager, Jim Wicks, who had his own distinct style of speech, in his case a masterly way with malapropisms (“We were wunderbra!” after a victory in Germany; “We almost suffered cardigan arrest,” following a narrow escape).

The book has two particular strengths: that Giller was in almost at the start of our hero’s career and knew him intimately throughout the rest of his life; and that the author is a masterful storyteller who can put his reader right there in the situation. One feels in a privileged position, eavesdropping on some of the best moments in British boxing; sort of standing within earshot and looking on without the main characters noticing.

The book takes us right through Cooper’s childhood and his career, from his amateur days and his first professional fight – a first-round KO of Andover’s Harry Painter at Harringay Arena in September 1954 – right up to the night at Wembley Pool in March 1971 when referee Harry Gibbs somehow decided that 37-year-old Cooper had lost on points to 21-year-old Joe Bugner when everyone else in the hall and many millions more watching on television made Cooper the clear winner. After which Our ’Enry declared: “That’s it gentlemen. That’s me lot.”

Of course, that run of 55 pro fights (40 victories; 27 inside the distance) includes the little matter of knocking down the then Cassius Clay with ’Enry’s ’Ammer at Wembley Stadium on a June evening in 1963.

We all know that a cut eye lost Cooper the fight in the fifth round but as he told Giller: “If only I’d had another minute, I reckon I could have finished him off … didn’t do bad for a bum and a cripple, did I?”

Interestingly, Giller reveals that although Cooper himself sometimes got it wrong – telling interviewers that it had been dreamt up by Walter Bartleman of the Evening Star, Des Hackett of the Daily Express, or Peter Wilson of the Daily Mirror – it was cartoonist Roy Ullyett who first gave national prominence to the name ’Enry’s ’Ammer, one of the most vicious left-hooks in the business. The expression was a favourite of Jim Wicks and after lunch with the manager one day, Ullyett went back to the office and made it the subject of a cartoon. From that moment, everyone talked about ’Enry’s ’Ammer.

There was so much more after Cooper retired, not least an enormous amount of charity work for which he was knighted in the 2000 New Year’s Honours List. Our ‘Enry gave of his time freely, always accepting requests to make public appearances if he possibly could, and never asking for a penny in return. Then there was A Question of Sport, and a lot of celebrity golf. Not forgetting those Brut advertisements (“Slap it all over!”), as well as promotions for Shredded Wheat, Plax, Crown Paint, Pizza Hut, and the wisdom of getting a ’flu jab.

It wasn’t all wine and roses, though. There had been an early and disastrous investment in a greengrocery business. Truly devastating was the disappearance of much of Cooper’s fortune as a result of the 1991 Lloyd’s Names scandal that followed in the wake of the 1987 stock market crash. To help pay off his debts, Cooper had to sell his three Lonsdale Belts and downsize his six-bedroom house in an exclusive part of Hendon.

On the afternoon of May Day 2011, Sir Henry Cooper died. His son, Henry Marco Cooper – with whom he had been living since ill health overtook him in the wake of the deaths of his beloved wife, Albina, and his twin brother, George – went to fetch his dad a snack as Henry watched his beloved Arsenal play Manchester United on television.

Marco returned from the kitchen to find the champion slumped in his chair. It wasn’t a bad way to go: Aaron Ramsey had just scored the winner for the Gunners.

Norman Giller’s book ends with a number of fulsome tributes to Henry Cooper, including one from SJA president, Sir Michael Parkinson, followed by a potted account of every one of those 55 professional fights.

Thanks to the book, which fairly rattles with other names from a golden era of British heavyweight boxing – London, Richardson, Erskine, Bygraves – I now feel that I know Our ’Enry so much better.