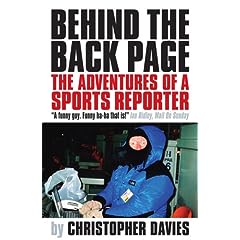 ANTON RIPPON reviews the sports reporter adventures of former Telegraph football man Christopher Davies, and discovers an interesting way of getting a taxi on a rainy night in Glasgow

Among those who have never been fortunate enough to do the job there is a common â€“ and understandable â€“ misconception that sports journalists enjoy the life of Riley. Five-star dinners in swank hotels, first-class travel, bags of time to loaf around and see the sights; and, best of all, being paid to watch top-class sport: these are surely the perks of a cushy position that most sports fans would sell their granny to obtain.

Well the last bit is true, obviously. Those whose by-lines appear on the sports pages of our national and regional newspapers are indeed lucky that, not only do they get to see the action, someone is also giving them money for the privilege.

As for the rest? Well, reading Behind The Back Page: The Adventures Of A Sports Writer by Christopher Davies will quickly disabuse the average fan of the notion that sports journalism must be the easiest job

on earth (providing you can write and like sport, of course).

SJA member Davies, well known to many in the Association and on the football circuit after he spent 20 years on the Daily Telegraph, including covering the Ireland football team when it was enjoying its most successful period, has produced a rip-roaring, rib-tickling account of the travails of the globe-trotting sports journo.

In doing so, he uncovers a world of long days, late nights, bloody-minded travel schedules, ever-shifting stories that demand urgent rewrites, and irregular bowel movements caused by a diet of Mars Bars, Milky Ways, Marmite sandwiches (donâ€™t forget to bring your own Marmite) and Coca-Cola. It is a world of laptops that never work, business centres that never open and where a banquet would be an airport pizza.

Given the obstacles placed before a sports writer in a foreign country, a well-honed sixth sense and a great degree of initiative are essential, although Davies didnâ€™t always have to be in an entirely foreign land to find himself relying on his native southern wit.

At Parkhead, just before midnight one rainy Halloween, when every taxi in Glasgow is booked, he decides to walk back to the city centre. One rain-sodden hour later, he finds that the taxi queue at the Central Station is twice around the block. A call to his hotel in Govan fails to bring out a cab for him, but then an angel appears in the form of a lady of the night. Davies asks her how much she charges, then offers her Â£5 more to drive him back to his hotel. Everyone is happy, although Davies is later miffed to see that she has signed the blank taxi receipt he produced: â€œCeltic 1, Blackburn 0.â€

Behind The Back Page is crammed with stories like that: learning to Shag in Florida (â€œpartner not necessaryâ€); being offered a fellow journalistâ€™s wife in Nigeria (possibly because he believed that Davies was close to the Queen); bugged by the KGB in the old Soviet Union; having his pocket picked in Colombia; blagging his way into an audience with the Pope; and trying to work out what Jack Charlton is on about. The narrative rattles along.

Davies, though, still has time to reflect on his surroundings, taking a tour guide bus around a strange city when he has time, and noting what an awful mess Luton airport is after he arrives from a spotlessly clean Barcelona. Welcome home to Blighty.

Davies began his career 40 years ago, in the days of manual typewriters, begging for a telephone and dictating reports to deaf copytakers (something he had to get used to again when his laptop refused to work in Japan, a land which, until then, heâ€™d always assumed was full of technological geniuses).

They were also the days when top international players were approachable (and, indeed, could be approached because everyone travelled together). By the time his long stint at the Daily Telegraph was over, players were closeted behind closed curtains on aircraft and appointments had to be made.

Behind The Back Page is a lovely book. Funny and poignant, if not in equal measure, the camaraderie between fellow hacks, thrown together in strange lands, is a constant theme.

Not least, Christopher Davies has to be applauded for probably being the only journalist ever to write about the time he paid a prostitute. Even if it was only for a lift home.

Behind The Back Page: The Adventures Of A Sports Writer by Christopher Davies (Know The Score Books, Â£9.99). Order the book from Amazon by clicking here