The Sports Journalists’ Association extends its warmest congratulations to our President, Michael Parkinson, who has been made a knight in the New 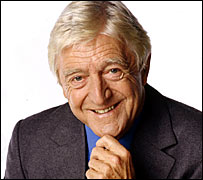 Year’s Honours List, a fitting reward for his career in television and print journalism, and coming at the start of the SJA’s 60th anniversary year.

The list offers more recognition for sports journalism, with Des Lynam – still among the most respected of TV frontmen and one of the guest presenters at the SJA’s recent sports awards – being made an MBE. BBC television athletics commentator and founder of the Great North Run, Brendan Foster, receives the CBE. Rachel Heyhoe-Flint, cricket and hockey international as well as commentator and columnist, becomes an OBE.

year that he was to retire from broadcasting to work on an autobiography and other projects. His final television chat show was aired two weeks ago, attracting 8.3 million viewers, while he ended his Radio 2 slot earlier this month.

In his career, Sir Michael – the son of a Yorkshire miner – has won a Bafta for best light entertainment performance, the prize for best chat show host at the National Television Awards, and the Variety Club’s media personality of the year.

He has been married to Mary since 1959. They have three children.

it would happen,” he said of the news of the knighthood. “It’s just fantastic, wonderful – a great honour.”

Other notable sporting names among the Honours list include Brian Ashton, the coach to the England rugby team which battled through to the final of the World Cup in October. Ashton, who collected the SJA’s Team of the Year Award at our ceremony earlier this month (pictured left receiving the award from BT Vision’s Marc Watson), is made an MBE.

Jason Robinson, scorer of the match-winning try in the World Cup final in Sydney four years earlier and a vital part of Ashton’s 2007 team, receives the OBE.

Veteran commentator Lynam, 65, is honoured for nearly four decades of broadcasting on sport for both the BBC, ITV and most recently Setanta. “This has been a splendid surprise and I feel truly privileged,” he said.