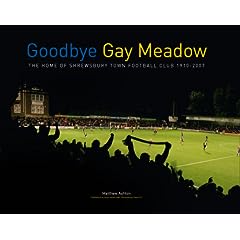 James Lawton was not the only SJA member to figure among the prize-winners at the sports books awards last week. Shropshire-based photographer MATTHEW ASHTON saw off the big-money publishers with his self-produced tribute to Shrewsbury Town

A book about the old home of little Shrewsbury Town Football Club defeated the might of Premier League giants Arsenal in the 2008 British Sports Book Awards. Goodbye Gay Meadow is a self-published title by Matthew Ashton, better known for being a football photographer. The book was named as the winner of the Best Illustrated Title at the Cafe Royal in London last week in an event hosted by the National Sporting Club.

The coffee table book contains images of Gay Meadow which were accompanied by memories from football followers who submitted articles for the project to serve up a fitting reminder to the club’s old home on the banks of the River Severn in the picturesque Shropshire county town. The old ground, scene of several giant-killing cup ties, , was demolished last year.

Mixing with multi-million pound publishers telling of their budgets and manpower that went into their best selling titles, the Goodbye Gay Meadow team responded on how the book was

constructed on a home computer and how Ashton walked to the bank to raise funds to help pay for the printing of the title. The book was printed by Tien-Wah in Singapore and was shipped back to the UK where Matthew and friends spent nine hours lifting the books off a broken down lorry.

“When people win awards you hear them say they were speechless and totally gobsmacked but this certainly was the case with us. It really was like an unfancied underdog going to a final for a day out and coming home with the trophy,” Ashton said. “I know many well known journalists and writers and some of the sporting icons whose books were up for awards but we were completely out of our league sitting with some of the competitors.

“The book has been a bestseller in Shrewsbury, with some independent bookshops proclaiming it to be the fastest selling book they have stocked since the launch of Harry Potter, yet being honest the rest of the country have not really seen it and it is certainly not a national best seller.”

The book has also been Book of the Week with the Independent newspaper and has gained much praise from many in the photographic industry and the world of football. The book has its own website www.goodbyegaymeadow.com, where fans can see exclusive pictures of the stadium being demolished.

You can order the book on Amazon by clicking here