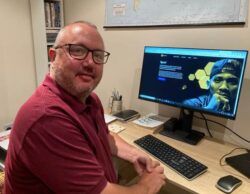 A few days ago, I read again the co-chairs’ report to the AGM last year. It talked about coronavirus casting a long shadow on our industry. Sadly, that continued in the intervening months.

Unlike those dark days in 2020, there is light at the end of the tunnel. The vaccination roll-out is continuing and with it the return of what we used to call normal.

For us, that includes the return of fans to sporting events. At first, we were just glad sport had returned, but as the weeks and months went on with empty stadiums it became apparent how important it was having spectators in grounds.

It’s also important that the media is covering sport live again, and not conducting interviews over Zoom, and it is something the SJA committee will be monitoring closely.

I have not chaired a meeting in person as they have all continued to be virtual. I hope soon they will start again so we can get together in person. I firmly believe that getting around a table to discuss issues is much more productive than over Zoom.

However, the members of the SJA committee have been outstanding these last few months as we have faced the challenges of working during the crisis.

One member who has served us superbly is our treasurer Sarah Juggins. She has been in the role for eight years and has now decided to stand down. Thank you, Sarah, for all your work, your shoes will be hard to fill. But we are now looking for someone from the committee to step up to this important role.

The British Sports Awards and the British Sports Journalism Awards clearly could not be held as usual. It left two enormous holes in the calendar, but several people stepped up to produce two brilliant virtual ceremonies.

Jim Rosenthal’s interview with Marcus Rashford was splashed all over the back pages. Rashford was one of four winners of a new category – the Sport for Social Change Award – in recognition of the work sportsmen, women and organisations have done to help people cope with the massive challenges created this year.

The British Sports Journalism Awards highlighted how brilliant our industry has adapted during the pandemic. We still produced remarkable stories and astonishing pictures. The broadcasters continued to entertain and inform us. We truly do have the best media in the world.

And we can get better. There are now genuine attempts to make our workplaces more diverse and reflect the society we live in. This can only improve our industry.

It’s important to keep recognising our achievements and the journalism awards is the place to do this. I’d like to thank every single one of the 150 judges who, in their spare time, helped decide the winners. We will of course be reviewing categories and have dialogue with sports editors and broadcasters ahead of next year.

We are also grateful for the continuing support of the National Lottery and Canon.

It’s worth a mention here for James Green and Start2Finish, the company which looks after our awards functions. Putting together two brilliant virtual awards with no previous template was a remarkable achievement.

Rashford also paid tribute to @MUFC for all the help he has had to get him to where he is today.https://t.co/fcthUqeUR3 #BritishSportsAwards #SJA2020 pic.twitter.com/NrBctcCaiG

Also, many thanks to Jim Rosenthal for hosting, to Sunset & Vine for producing the excellent programmes and Mary Fitzhenry, chair of the Awards Committee. And a mention to two other committee members, Faye Carruthers and Karthi Gnanasegaram, for their support and professional work.

The quality of the awards shows was highlighted by our social media activity. On Twitter we had 1.3million impressions in December and 10.4 million in March, the months our awards were held. On the night of the British Sport Journalism Awards we had 5.9 million impressions (compared to 963,000 the year before).

On Instagram our followers have doubled and on posts relating to the Journalism Awards we got 23,711 impressions.

Many thanks to Janine Self and Jon Holmes for their care and attention while looking after our social media accounts, and James Toney for his work on the website.

Going forward, we will continue to support the Sports Freelancer Collective which helps and advises sports journalists facing issues such as mental health, job losses and financial problems.

Finally, to end on a positive note, we are now well under way developing the SJA Academy. This will create a resource for young people to support them when entering sports journalism and is being organised by James Toney. There will be more information about this exciting venture in the coming months.

Ashley Broadley is the chair of the Sports Journalists’ Association and the sports editor at PA Media.