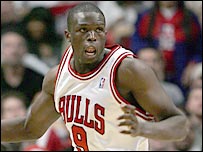 to attend the first sports event to be staged at a London 2012 venue in the new Olympiad.

Thanks to British Basketball and FastTrack, we are able to offer the VIP tickets for Great Britain men’s first EuroBasket A game at the O2 Arena on Saturday, September 6. GB men’s squad includes Luol Deng (pictured right) and Ben Gordon, who both play for the Chicago Bulls in the NBA, plus another nine players based at college in the US.

The tickets will be allocated on a one-per-member, strictly first-come, first-served basis, and MUST BE CLAIMED BY THIS FRIDAY, August 15.

This will be the start of the team’s journey to qualification for the FIBA European Championships 2009. It will also be the teamâ€™s first steps towards the ultimate goal of playing at the London 2012 Olympic Games where the O2 Arena will be the venue for the basketball finals.

The VIP tickets include post-game hospitality and the opportunity to meet some of the players.

To claim your ticket, send an e-mail to Steven Downes