Steven Downes, the SJA Secretary, reports on how the press coped at the recent European athletics championships staged in Gothenburg

So this is covering sport in 2006: there’s not a landline phone to be seen anywhere on the press tribune along my row or the row in front of me in Gothenburg’s Ullevi Stadium. Instead, we are all wi-fi’d up, with mobiles tucked in our pockets.

The data screen in front of us (one screen between three working journos) has been plugged in to the extensive database of tilastopaja.net, and flashes up instant results, plus wind speeds or lap times, and round-by-round scores for all the field events. And, in a superb innovation, the touchscreen even allows you to check out personal biogs of every competing athlete.

This cutting edge facility is only slightly marred during the women’s 20km walk when, with nothing better to do, I discovered that all the entrants have the same mug shot – that of a 22st Russian male shot putter.

But that would be nit picking. The data screens have so much information, provided so speedily, that the result sheets brought to our desk by the ever-eager volunteers are virtually redundant. The paperless championship cannot be very far away.

As for “nannies”, the local organisers’ fast quotes team covered all medallists, whatever the language, helpfully translated into (a sort of) English that is posted on to the data screens, and which I can also access via the championships’ website soon after when seeking that vital bit of context on the latest Belarussian bronze medallist.

Given the slippery, wet conditions for half the week and the near-vertical descent on an unlit steel staircase to get from the tribune to the mixed zone (“You’d never get that past health and safety in England,” one vertigo sufferer among our number asserted), such a service was welcome indeed, and may be the single biggest reason that during the week, no journalist broke a leg or their neck in taking the risky route to the mixed zone.

Meanwhile, in the dull moments (and there are a few), I plug the headphones into the laptop and listen via the BBC website to England’s progress in the Test match, or even check out the latest controversial utterances of chief coach Dave Collins on the Today programme (70 athletes have missed tests, Dave? And what are you doing about it?). I can even watch BBC television’s coverage of the meeting if I choose, just to check out if Michael Johnson is making any mischief with his analysis.

And then I turn off the web radio and boot up Skype and make a voice over internet phone call to the office in Edinburgh to check on wordage for Saturday. Cost of call: £0.00.

All of this technology and material, all at our fingertips, means that the old-style press centre is almost redundant. Apart from the day before the championships, when I worked from a desk there, I visited the press centre only rarely, just to check whether there might be a press conference announcement posted there. That this press centre was sited across a shaky wooden bridge, via another set of break-neck stairs, might have had a little to do with this.

But compared to even five years ago, the look of a typical press centre was entirely changed: much smaller in size, there were no phones, a bank or two of PCs for general use, a help desk and a phone company desk for sales of wireless internet access (wi-fi). As long as you have one of those card-thingys installed in your laptop, for Â£60 you got limitless web access all week from the stadium and the immediate vicinity. That’s the phone, e-mail and internet all looked after in one deal.

Compare that to the old-style hassles of booking a phone and getting the line installed (which normally never happened until halfway through the opening session), and then paying for your calls, or making sure that someone else wasn’t using your phone to call their auntie in Australia, and this was bliss.

The old telephone hassle reminded me of my first European championships, in Stuttgart 20 years ago. There, in the early days of the Tandy with its ridiculous acoustic couplers, many of us were still opting to file to copytakers by default.

So when, at around five past eight (London time) on a Thursday morning, Fatima Whitbread somehow chucked the javelin further than any woman in history with her first effort of the qualifying round, I not only felt an inner glow of professional pride in being there when most of the press seats were empty, but it also helped to have the security key to my phone (paid for by the Morning Star) and so allow Neil Allen the chance of using it to ring the Evening Standard.

But Gothenburg this year marked perhaps the low water mark for athletics as a sport for British sports editors. Pete Nichols was covering his second championships in a decade, and he made the observation halfway through the week: “Funny, isn’t it, that there’s no chiefies here.” 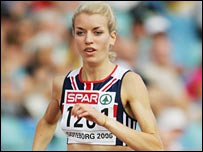 The big athletics event of the year would always see the athletics correspondent accompanied by the paper’s chief sports writer: the David Millers and David Walshs would make their annual appearance at a track meeting. Paul Hayward had been a regular at track meets when working at the Telegraph or Independent, and even Robert Philip endured a week of tedium in Deadmonton in 2001.

And back at those glorious, union flag-draped European championships in 1986, the doyen, Ian Wooldridge, was in Stuttgart to pen the line about McKean, Coe and Cram, coming off the final bend for their cleansweep of 800m medals “like three Spitfires coming out of the sun”.

But Gothenburg 2006? Not a single chief sportswriter. It was not as if the championships clashed with the start of the football season. How does that reflect on athletics’ importance and status among our national newspaper’s sports editors? Between now and 2012, the sport desperately needs to discover a few more winners, of medals and the public’s imagination.

Otherwise, worries about the state of Britain’s team for the London Olympics ought to extend to the press seats as well as the track.