Turmoil at the top of the editorial staff of a leading regional newspaper has prompted its erstwhile editor to call for a campaign to save local journalism. ANTON RIPPON reports

Where is local print journalism heading? 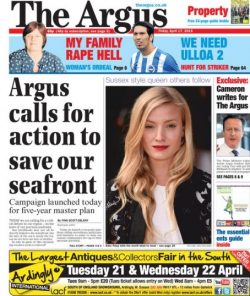 It is a question worth asking – yet again – after the goings-on in Brighton where, only weeks after taking over as editor from Mike Gilson, Lucy Pearson is now leaving the Newsquest title, The Argus.

Gilson – described by Professor Roy Greenslade in his Guardian Media column as ” the best editor the Brighton Argus has had in many a long year” – was axed last month. Now Pearson has also gone, after being offered “a senior role at another company”. Newsquest issued a statement: “After much consideration Lucy has decided to accept the other role and we wish her all the best for the future.”

We don’t yet know what prompted Pearson to leave so soon but Gilson had plenty to say after he left. In what was one of a series of essays contained in Last Words? How Can Journalism Survive the Decline of Print? published by Ambramis, he questioned the future of local journalism.

It is a trenchant article and a recommended read, offering much for all journalists to consider. Gilson’s key point, after highlighting three stories most definitely in the local public interest, was this: “The Brighton stories could easily have forever existed in a little orbit of their own, unheralded by anyone, unremarked. Journalists made sure this was not so.”

Gilson highlighted that, since 2008, more than 8,000 journalists have lost their jobs. “Ironically this has not been deemed important enough a story. Newspapers have folded, commercial television news is decimated and only the BBC has staff in numbers even though at local level it still often feeds off what is left of private sector reporting.”

He characterises as “old-fashioned journalism”, as the practice of “telling people things they didn’t know and having to spend time finding those things out”.

And he offers a distinction between “old-fashioned journalism” and the coverage offered by bloggers and “citizen reporters”, the reduction of the former which is creating a democratic deficit, as Gilson sees it. He offers examples: “In some towns, courts, council meetings and trust boards are all going unreported now. Meanwhile the explosion of press officers, more often journalists fleeing a shrinking industry and skilled at ‘social engagement’ now outnumber salaried journalists in many areas.”

In football reporting, this phenomenon has been encountered with some clubs seeking to be the only source of news about their teams, through their own press staff and via their own website and social media feeds, sometimes providing profound insight into the day-to-day running of the local team which an under-staffed newspaper’s sports desk could rarely offer, but never providing the essential objectivity of the local paper’s reporters.

The difference, some might suggest, between “telling people things they didn’t know”, and advertising.

The difference, some might suggest, between ‘telling people things they didn’t know’, and advertising.

Gilson makes some suggestions for the future of journalism in print, which can, and needs, to exist apart from its digital operations. “Is it exclusive, targeted and unavailable anywhere else?”, he says are the test for quality journalism which could continue to command a cover price to finance the cost of its journalism.

And he makes a call for action: “This is the time for a concerted explanation, a campaign if you like, to tell society what we will all miss if the cull of journalists continues at the same pace. Only after such efforts, when the debate is fully aired, might we have to conclude print-based journalism has no place in the shiny future. We are not there yet.”

On taking over from Gilson, Pearson had said: “I am hugely passionate about The Argus and the community it serves.

“When Mike joined he said that we would be at the centre of debate and at the core of everything. He also said our journalism would be vital and trustworthy.

“I believe that under his leadership our team of talented and hardworking journalists delivered on that promise. I will endeavour to continue in his footsteps while putting my own stamp on both our print and online products.”

So what went wrong so soon?

Those of us – well, ok, some of us – brought up in the days we still yearn for, of hot metal and daily circulations measured in six figures – will blame the internet for all our business’s current woes, and as print sales of the Argus fell 10.3 per cent to an average of 11,424 copies per day in the first half of 2016, while daily website traffic grew 6.4 per cent to 54,365 unique browsers per day in the same period, we might have a point.

One digital editor of a regional paper told me: “The only thing that matters to the firm is web hits, which are measured second by second. We’re set targets of page-views per day, and our success is judged entirely on whether this is achieved.

“They only want items that will get big hits online. These are mostly food and pub stories, the local football club, breaking news, the weather (snow is always good) and anything a bit naughty – sex, obviously.

“It’s been a massive shock to me. I feel saddened that the entire newspaper industry is now controlled by web-hit performance. Saddest of all, people are getting what they look at. And the more they look at rubbish, the more rubbish they will get… ”

At another newspaper, a sports sub complained: “Our main football man writes solely for the website these days. Then from that we have to cobble together pages for the paper.”

I keep coming back to Gilson’s words: “Is it exclusive, targeted and unavailable anywhere else?”

It might be worth someone reinventing the wheel after all.