An American Football publication is on British news stands for the first time in six years.

Lindy’s Pro Football Season Preview is one of the biggest selling annuals of its kind in the United States, and thanks to freelance journalist Simon Milham, it has now made its way to the UK. 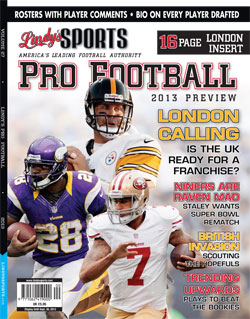 The 244-page magazine has a dedicated 16-page insert for British fans, who will get to see two NFL games at Wembley Stadium this autumn.

Since the Miami Dolphins played the New York Giants at Wembley in 2007, American Football has really taken off in Britain. Not only has there been an official NFL regular season game played at Wembley since the original fixture, but audiences, both at the national stadium and on television, have grown significantly each year.

The Minnesota Vikings “host” the Pittsburgh Steelers on September 29 and the Jacksonville Jaguars take on the San Francisco 49ers on October 27.

The Jaguars will also play a regular season game at Wembley every year until 2016.

Lindy’s Sports Pro Football also debates whether London is ready for a full-time NFL franchise and also takes a detailed look at the British-born NFL players past and present, with scouting reports on those Brits attempting to make it in the NFL this year.

Milham, who was shortlisted for the SJA’s Sports Betting Writer of the Year award in 2011 and 2012, is a veteran NFL writer. In the past he has worked for the Racing Post, The Sportsman and Daily Mail, and his columns are widely read on betting exchange Betdaq.com.

It was his brainchild to bring an existing magazine to the British market – although when he contacted Alabama-based publisher Lindy Davis to pitch the idea, he was asked to do something foreign to him.

“I had to join the dark side – I was asked to sell a certain amount of advertising before the publisher would test the water,” Milham said. “It was new to me, but fortunately enough advertisers backed the project.

“Since 2007, when First Down closed, there has not been an American Football publication in the UK. I just felt the time was right and there was a void in the market that was not being filled.

“I believe in the product and you can’t sell successfully without having total faith in something.

“It is very costly to produce a start-up magazine and there was no point in re-inventing the wheel. Lindy’s Sports is a fabulous product. It is regarded by most NFL fans in the States as the Bible and fortunately the publisher believed in me – which is a refreshing change. Hopefully we can make this an annual publication in the UK.”

Milham has also contributed to the publication, and his thoughts on the viability of a London franchise and British sports editors’ reluctance to go beyond the realms of Premier League coverage are typically forthright.