Two West Country sports journalists have just overseen the printing of the first edition of a free sports magazine they have founded. 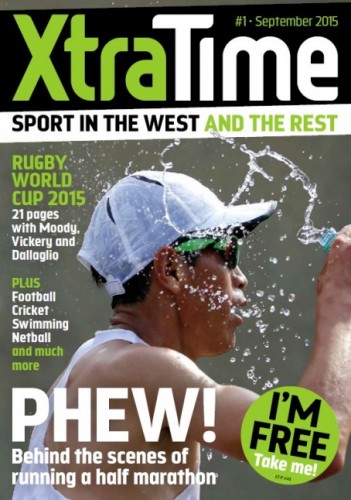 Neil Beck, until June this year sports editor of the weekly Bath Chronicle, and Andrew Kerslake, who wrote Bath City FC match reports for the Chronicle as well as commentating on Gloucestershire and Somerset cricket matches for the BBC, have founded XtraTime that covers sport in the West Country including Bristol, Bath, Swindon, Gloucester and Cheltenham.

The 84-page magazine is available at 500 outlets throughout the region, after an initial print run of 30,000 copies.

The first edition features London 2012 medalists and unsung sporting heroes from the area. There are interviews with Olympic gold medal-winning rower Helen Glover, and swimmer Michael Jamieson who took silver at the London Games.

The forthcoming Rugby World Cup is covered over 22 pages including the thoughts of four members of the England squad that lifted the trophy in 2003 – Lewis Moody, Trevor Woodman, Phil Vickery and Lawrence Dallaglio – together with recently retired Wales forward Ryan Jones.

Beck, who began his career in 2001 on the Wiltshire Herald and Gazette, served as the Chronicle’s head of sport for seven years.

He said: “I just felt this was an area of untapped potential in terms of in-depth features and people who don’t get coverage elsewhere.

“I have always believed that the West punches massively above its weight in that area and XtraTime cannot wait to showcase the achievements of sportsmen and women at all levels and across a variety of disciplines.”