At least two of the Independent group’s longest serving 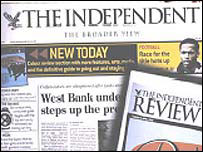 and most-respected figures from their sports desks are to leave under the newspapers’ voluntary redundancy package.

Neil Morton, the sports editor at the Independent on Sunday, and Phil Shaw, the daily paper’s football writer, have both accepted the voluntary redundancy package, which has been described by management as “the most generous in Fleet Street in years”, while Matthew Beard, who has covered the Olympic beat for The Independent‘s news desk, is also to leave.

As part of the resulting staff reshuffle across the papers, SJA member Simon O’Hagan,

at present features editor on the Independent, is to replace Matthew Hoffman, the deputy comment editor.

In total, around 40 staff will be leaving the newspapers – more than a dozen more than had originally been expected – after some 70 journalists applied for the voluntary terms which allow for one month’s salary to be paid for each year’s service.

Both Shaw, who covers Midlands football, and Morton have been with the Independent since its launch in 1986.

Staff learnt via the morning post yesterday whether their voluntary redundancy applications had been successful. The departures will be staggered over the next three months.

According to reports, Independent News & Media, having originally planned to scale down by 25 posts, will now hire staff to replace the 10 to 15 additional journalists who are taking voluntary.

The past week has seen reports of greater “integration” – which usually means fewer jobs – being mooted between The Sun and the News of the World, while The Guardian Editor Alan Rusbridger spoke about a 24/7 operation across his title, The Observer and their website as part of their Â£15 million online investment.

But the Independent group has reportedly opted not to follow that trend, with no plans to merge its two titles into a seven-day operation. The UK Press Gazette quoted an unnamed source as saying: “They are going to end the nine day fortnight for sub-editors and they are going to a five day week.”

NUJ Mother of Chapel Kate Simon told Press Gazette: “We’ve heard some of management’s plans but we need more detail on them but we will be having a chapel meeting on Thursday at which we will be trying to give the chapel as much information as possible and draw some conclusions about what it is really going to mean for our journalists who are left behind.

“The end to the nine day fortnight is very worrying from our point of view.”

Read more on the situation at The Independent by clicking here