The Telegraph has broken new ground by appointing a full-time women’s football reporter for the first time.

Katie Whyatt, Bradford fan and highly commended in the student writer category at the SJA 2016 Sports Journalism Awards, starts on Saturday and  will be covering every domestic and international aspect of the sport ahead of next summer’s World Cup.

Bantams supporters will be familiar with Whyatt’s writing in the match programme and her blogs on Width of a Post.

Adam Sills, Telegraph’s head of sport, said: “The Telegraph continues to invest in journalism and is delighted to announce Katie Whyatt as its first full-time reporter on women’s football. This shows once again The Telegraph’s commitment to covering women’s sport and to sports journalism in general.”

Absolutely thrilled to be the Telegraph’s first full-time women’s football reporter. A dream come true. So excited to get started this weekend and to join a great team @TeleFootball 😊👍🏻 https://t.co/h7rgUSLZtT

Whyatt’s recruitment is not the only change at the paper. Ross Clarke has been appointed the paper’s first betting reporter.

In further changes,  Jeremy Wilson is to become chief sports reporter, moving from his role as  deputy  football correspondent to a wider brief. Wilson last year won a top Alzheimer’s Society award for his work on dementia and concussion in sport (pictured below)

He also scooped the investigative reporter of the year prize at the SJA 2017 British Sports Journalism Awards. 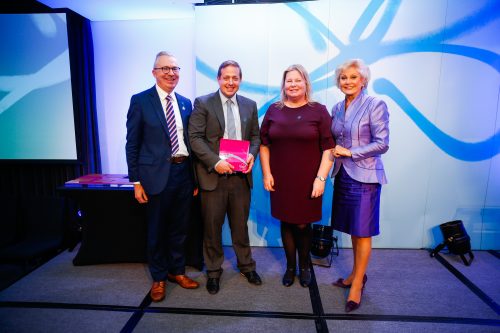 Replacing him as main correspondent on Arsenal and other football coverage will be Sam Dean, previously sports reporter. These changes will also come into effect on Monday October 8.

Furthermore, Telegraph Sport has welcomed two new additions to its online team, with Pippa Field and Adam Hurrey taking up roles focusing on all aspects of digital publishing.