Gary Bloom is a clinical psychotherapist working in Harley Street in London and a clinic in Oxford. 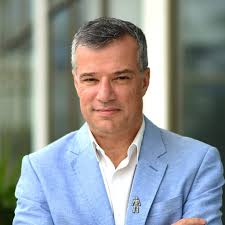 He specialises in treating professional sportsmen and women, coaches, managers, teens and adults. He holds a post graduate diploma in psychotherapy and counselling and is a member of his professional organisation (BACP).

He treats anxiety, depression, addictive behaviours, and relationship and career issues and also works in schools with under-achieving young people.

Gary  spent 25 years as a sports commentator and broadcaster, working mainly on football, and was one of the voices on the highly popular Channel 4 show,  Football Italia.  He still works as a sports broadcaster at major events and is a member of the SJA.

His broadcast therapy show On the Sporting Couch on talkSPORT won an Arias (Audio Radio Industry) award in 2017.

Here he asks why journalists are so reluctant to seek help when there is such a high risk of mental health issues in the profession.

A few years ago, after returning from a five-week stint working at a FIFA World Cup, my partner at the time called me into the kitchen for ‘one of those chats.’

Most of us have been there. It’s the what’s going on in our marriage/relationship/partnership one – and then she said something quite revealing to me.

“You do realise that your profession is incompatible with us having a steady relationship.”

It made my think of my colleagues, nearly all of whom had gone through a divorce at some at some stage of their lives, including myself.

When I reflecton the early part of my career, I was part of a gaggle of journalists in the north-west of England covering the Merseyside clubs. They were some of the best in the business, but it was before the age of the internet and if the back pages had been put to bed it was time to phone bash until the next copy was due.

Personal lives had to take a back seat. There was high incidence of addictive behaviours (especially drinking), and stress and burn-out was commonplace. So were relationship break-ups

Personal lives had to take a back seat. There was high incidence of addictive behaviours (especially drinking), and stress and burn-out was commonplace. So were relationship break-ups.

These days I am a clinical psychotherapist and can re-evaluate my own and other’s lives. While those days are long gone, I think today’s journalists are under even greater pressure but in subtly different ways.

The internet means copy is demanded 24/7 and with many sports clubs applying increasing control about what is released to the press, it’s becoming harder and harder to find original quality stories.

In my clinic I see many people from all walks of life suffering from burn-out. This is due to the body being placed in a stressful situation for long periods of time and ready to switch at any moment into the ‘fight or flight’ mode. It’s our natural response that the limbic part of our brains (in charge of our base emotions) regulates.

Think about standing on the edge of a cliff looking down – the limbic part of our brain rings the alarm bells and encourages us to step back.

Imagine what happens when the alarm bells are ringing all day to meet that deadline or make a broadcast at short notice. Now add overseas travel, lack of sleep and long hours and the strain of being absent from loved ones.

One curious aspect of my client list – and I’ll probably see 20 or so a week – is that I’ve yet to see a journalist or broadcaster. Nor has the clinic in London where I work.

If the statistics are to be believed – that at least one in four of us will suffer some form of mental illness during our lives – then I wonder where the journalists are getting help.

One curious aspect of my client list – and I’ll probably see 20 or so a week – is that I’ve yet to see a journalist or broadcaster. Nor has the clinic in London where I work

I have a theory. Many sports journalists I’ve met on my travels learning about my ‘other’ profession often poo-poo the whole concept of psychological illness saying that strugglers should just man up.

Yet the same people have written brilliant sympathetic copy and broken countless stories of our sports stars cracking up under the strain. Go figure.

So if any of the above rings any bells, ask yourself a few questions:

If two of the answers of the above are ‘no’ you probably need an MOT to check you are ok. If you have any concerns, please take a visit initially to your GP or feel free to get in touch with me g.bloom@cognacity.co.uk for a confidential free informal chat.

The majority of sports journalists are male between the ages of 25-50, and statistically this is the group most at risk of lasting psychological damage. Please look after your career by looking after yourself.