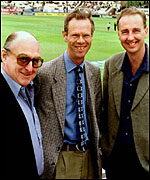 plans to alter that great broadcasting tradition, Test Match Special. Post your comments on our blog below

This is a crucial year for Test Match Special. The much-loved radio programme – the most-loved sports radio programme – is going to change, and that change may be painful both for those who have grown up enjoying it, and for the people who have made it what it is. It will change because the decision-makers within the BBC sports department, some of whom are uncomfortable with its popularity, want to drag it into the 21st century (as they see it), so listeners should enjoy it while they can. They may be hearing the last knockings of a grand old show.

Change in itself is not always a bad thing, and there are aspects of TMS that could do with immediate amendment.

But there are solid advantages, and the White City strategists should start with Jonathan Agnew, the cricket correspondent (pictured above, right, with, from the left, TMS regulars Henry Blofeld and Christopher Martin-Jenkins). There are, one gathers, desk-bound figures within the corporation who think he might do more for his money but when he is on parade he is outstanding. Like his predecessor, Christopher Martin-Jenkins, who now serves as a commentator, Agnew has the right voice for radio, and for cricket. It is clear and bright, and – although a cricketer in his previous career – he avoids jargon. While he is fair, he is not afraid to get stuck into the players if it is necessary.

In fact, the people entrusted with training BBC journalists should issue all reporters with tapes of these two superb commentators, and instruct them to pay attention. If everybody spoke as clearly as Agnew and Martin-Jenkins then all listeners would be better off. Along with Ian Robertson and Cornelius Lysaght, they represent public-service broadcasting at its best.

And there’s the rub. The bigwigs in the sports department, housed within the extended family of Five Live, do not always feel comfortable with a game that can move slowly and may take all of five days to resolve. In their eyes everything must be made more “accessible”, and we all know what that means. The fact that Aggers and CMJ are well-spoken will not necessarily count in their favour. Social engineering, in case it had slipped your mind, is the driving force within the modern BBC. Some producers actually prefer people who speak sloppily because they imagine it confers a common touch.

If you want to know what TMS may sound like when Peter Baxter, its long-serving producer, shuffles off into retirement this year, then watch the corporation’s television highlights of the Ashes series. Presented by Manish Bhasin, an excitable youth whose knowledge of the game is sketchy but who waves his arms around and talks in headlines, it bears the stamp of the modernisers. Geoffrey Boycott’s barely concealed contempt for the boy Bhasin’s fifth-form questions has been a highlight of the winter.

It has proved impossible to find successors to John Arlott and Brian Johnston, and with good reason. One was a supreme wordsmith, the other a consummate pro, and both men made broadcasting seem an absolute doddle.

What TMS badly needs is a summariser like David Lloyd or Michael Atherton, but they are paid handsomely by Sky. Instead we are likely to get more line-and-length reporters who bring the vocabulary of football to a game that requires a different temperament.

Do you want to join Henderson’s “Campaign to Save TMS“? Post your comments on this article below

And read about the SJA’s Broadcasting Awards by clicking here