The Times has today published its obituary of Catherine Riley, the paper’s former deputy football editor who died earlier this week.

We reproduce the obituary here, with permission: 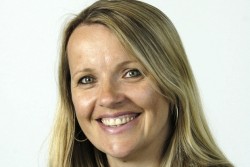 There are still remarkably few women working in sports journalism, but when Catherine Fraser joined The Times in 1999 there were no more than a handful employed by the national newspapers. Over nine years in Wapping, she burnished a reputation as a talented, witty and knowledgeable writer, more than able to hold her own in the press box with her male colleagues.

Catherine Riley, as she was, began her career in journalism at The Sporting Life and The Independent before moving to The Times. She could turn her hand to most sports and took on whatever tasks were thrown at her with good grace, even if some were through gritted teeth. They included passing herself off as Krystal Balls, a football astronomer, and designing an origami sunhat from the sports section that Celtic fans could use to protect themselves in the searing heat of the 2003 Uefa Cup final in Seville.

Her main loves were motorsport and football, particularly as an Arsenal season ticket-holder. Promoted to deputy football editor, she helped to launch The Game, the highly successful Monday supplement, and reported on the 2002 World Cup from Japan and South Korea. Her normally meticulous organisation let her down, however, when the birth of her daughter, Dulcie, coincided with the climax of the 2004 European Championships, an error of timing compounded by the football editor going on honeymoon the same week.

In 2005, she became the second editor of the Bricks and Mortar property supplement, fulfilling a passion for home-building that had been sparked by motherhood. After a year, she returned to the sports department. She also held the post of motoring editor, a role traditionally occupied across the industry by middle-aged men in corduroy jackets.

Colleagues recalled a woman who was strong-willed but fun. No one who worked with her could ever forget her idiosyncratic sneeze, either. It was said that a Riley “wiii-cheee” could pierce even the noisiest Formula 1 pitlane.

She was married twice, latterly to Dulcie’s father, Dominic Fraser, a professional photographer, from whom she was separated. In 2008, she left The Times and went back to her family roots in Devon, where she worked as a journalist and for Exeter City football club as a community operations manager.

Breast cancer was diagnosed in 2013 after she volunteered for the sake of a story to test an innovative thermal imaging technique. Although the illness was successfully treated at the time, it returned in her womb this summer and she was unable to recover. She is survived by Dulcie and by her partner, Jamie Vittles, the Head of Community at Exeter City.