Earlier this month, MARTIN SMITH, of Sheffield’s The Star, the winner of the SJA’s Regional Sports Writer Award in 2003 and 2005, completed his hat-trick. But he has a confession to make…

I won the SJA Regional Sports Writer of The Year Award the other night. 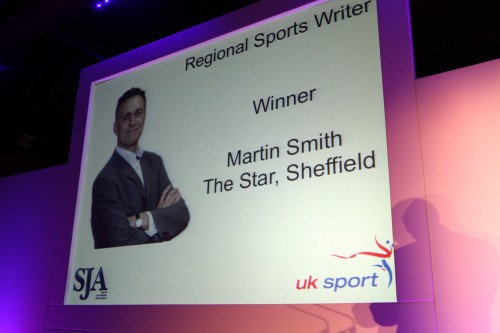 I took the glory, drank the wine, shook hands with some heroes and kept my mouth shut.

Now I have to confess.

I’m not a sports reporter, I’m not a member of the SJA, I don’t have “the desk” to keep sweet or have to file running copy above the madness of a last-minute winner, nor do I have to wait in car parks to speak to feckless new signings. I haven’t been to a pre-match press conference in years.

I’m not even sure I ever wanted to be a sports writer exclusively.

But, with great respect to those who brave the February rain, endure deaf copy-takers, 200-mile drives home at 1am and managers who won’t pick up their mobiles, none of that really matters.

What matters is Skinner’s Personality Theory.

Not the American psychologist BF Skinner, but Frank Skinner the comedian who once memorably said something like: “It’s not about how good a player you are, it’s about the way you feel inside when someone throws you a football.”

No one ever summed up better the uniquely emotional appeal of football and sport generally.

It’s not just about being at the biggest games, fights or races, thrilling though they are. It’s about the way you feel when you see flashes of real ability, glory lost and won and lost again, bitter personal clashes and moments of tenderness, the things that make sport so compelling.

It’s also about the feeling you get when you need to find the words to describe action or insight, the dread of the empty column, the quote that changes everything.

There have been lots of those feelings.

Wednesday, United, Rotherham and Barnsley all promoted and relegated again, the uncanny and hypnotic power of young Naseem Hamed’s self- belief before a fight.

I’ve had lunch with Michael Vaughan, dinner with Lee Westwood, been fishing with Clinton Woods, shopping with Vinnie Jones, enjoyed a 20-year acquaintance with the incomparable Brendan Ingle, been to Whitehall to speak to Richard Caborn, Devon to interview Neil Warnock and our front counter to take junior football results.

I was Sports Editor at The Star for seven years before moving to features six years ago wanting a change. But I couldn’t give it up altogether.

A football column, an extra pair of hands at the play-offs with Doncaster, Barnsley, Wednesday or United, feature interviews with lots of new managers and briefings with World Cup bid teams allowed me to keep in touch.

Add a column defending Rotherham referee Howard Webb’s World Cup final performance and a feature on World Championship snooker staying at the Crucible for five more years and it made an entry for the Regional Sports Writer award.

Winning it was fantastic, I wish I’d had the wit to say a few words of thanks at the time but I didn’t, so I’d like to say thank you now to everyone involved.

But as Skinner’s Personality Theory tells us, it’s not really about the way it feels to win awards, marvellous though that is. It’s about the moment when somebody does something special and you have to find the words to tell everyone about it.

And it doesn’t matter where you are.

You could be in Bangalore for The Times, at Wembley for The Star or watching Langold Juniors for the Worksop Guardian.

It’s the way it makes you feel inside that’s important.

Throw us that football again Frank.

To read more of Martin Smith’s sports columns in The Star, click here