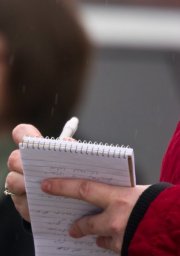 KEITH ELLIOTT, the SJA’s training adviser, on what is really needed to enter the profession

Wish I had a pound for everyone who comes to see me saying: “I’d like a job in sports journalism.”

For many, it comes as a surprise that watching Match of the Day and being a member of Plymouth Argyle Supporters’ Club are not enough to have The Times offering huge sums for their undoubted talents.

I don’t know what careers officers are telling today’s kids, but it’s a pile of the stuff left behind in the stables after Cheltenham Festival.

Yes, you can get a job on Sky Sports, FourFourTwo or The Sun sports desk – if your dad’s the editor.

In fact, your chances of getting a first job on any kind of sports desk, especially at the moment, are about as good as the chances of Britain winning the Davis Cup. Actually, that’s a bit harsh. Your sportswriter dream is merely highly improbable.

But before you take your parents’ advice and start on the long, dreary road to becoming an accountant, let me throw in a smidgeon of hope. Those who are keen, hungry and determined enough will become journalists.

Here’s the key thing, though. You are very unlikely to start as a sports journalist (unless you’re an ex-cricketer or footballer, but we won’t enter that debate for now). What you need to do is to become a journalist first.

Sport – like business, the arts, travel, crime, health or politics – is a sub-section of journalism.

The fact that you’ve visited 23 countries won’t get a travel hack’s job, just as a past life with the RSC won’t win you the arts beat, and knowing the Christian names of the Liverpool team won’t shoehorn you into the press box at Anfield.

Subject knowledge is important. But would you know what to do if a fire broke out in the ground and dozens of people were trapped? Could you file a running story?

If you had been covering the Munich Olympics when members of the Israeli team were taken hostage, would you have had the wit to dress as an athlete (as the late John Rodda did) and get into the Athletes’ Village?

That’s why you need to learn the core journalistic skills.

Imagine a giant house, with a huge party going on. Inside the house are lots of rooms with Art, Sport, Political, Foreign, Theatre and so on written on the doors.

You knock on the door. A bouncer the size of a redwood answers. “You can’t come in unless you’re a journalist,” he growls.

You wanna join the sports writers? Was that the pop of Dom Perignon from their room? Then you’ve got to get through the main door.

OK, you say. I’ll be a journalist first, then head for the sports desk. Where do I sign?

It’s not quite that simple.

The days of knocking on an editor’s door and getting a job because he (it was always a “he” in those days) liked your nerve are long gone.

Editors want people who are immediately useful, rather than enthusiastic amateurs. The latter are a liability: they work too slowly, miss out key facts, can’t spell or punctuate and make too many mistakes.

So don’t even bother applying unless you’re coming to me with the core skills. But how do you acquire them? By working on a newspaper, magazine or website, dummy.

The phrase Catch 22 is probably springing to your mind. And you’re right. You can’t get a job without experience, and you can’t get experience without a job.

There are several ways around this dilemma, ranging from the scandal of internships to courses. The latter can be cheap and nasty; they can also be expensive and nasty.

There are, I’m told, more people on journalism and media studies courses than jobs in the industry. So in the next episode, I’ll take a look at what to look for and what to avoid in a journalism course – and what you need to do to win a place anyway.

For the SJA’s extensive, free advice resource, from what GCSE and degree courses to choose, through to on-the-job  training and what courses are available, as well as more from Keith Elliott, click here

2 thoughts on “Dear Keith: How do I become a sports journalist?”