There must be a busy summer of sport coming up, if the weight of packages arriving at SJA Towers is anything to go by, as our members have been busy getting books published that cover all aspects of the coming weeks’ action. 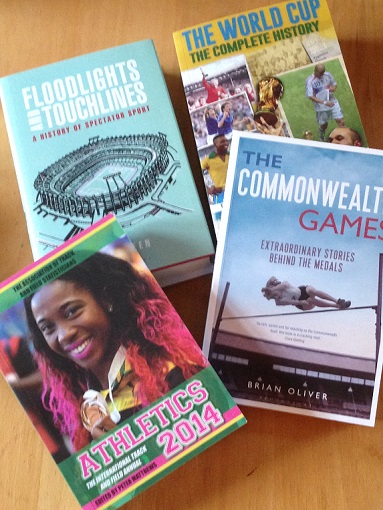 Two statistical guides that should prove indispensable to those covering the World Cup or the summer’s track and field action at the Commonwealth Games and European championships are The World Cup: The Complete History, published by de Coubertin Books and compiled by Terry Crouch with James Corbett, and Athletics 2014, edited by Peter Matthews and published by SportsBooks, the publishing house of York-based SJA committee member Randall Northam.

This is the fourth edition of this stat-packed monster that is the 752-page World Cup guide ought to have been in the hand luggage of every football writer heading for Miami this weekend, as it includes… “Every tournament, every game, every team, every goalscorer, every result…” well, if it includes every game, you’d hope it includes every result, and “…everything you ever wanted to know about the greatest sporting show on earth”, the publishers state, presumably having overlooked the Olympian claims of their namesake, the good Baron de Coubertin.

That aside, for those who are fascinated by checking the score of how Montserrat lost 5-2 at home to Belize in the first-leg of their first-round qualifying match in the CONCACAF qualifying tournament for Brazil 2014, or the outcome of the much-anticipated clash between Nepal and East Timor in the Asian qualifying tournament (it was 2-1, since you ask), then this book, with its summaries of every finals tournament and all the results from the latest round of qualifying is a must-have.

I’m going back to confirm that there has only been one team so far in the 84-year history of the World Cup that has won the final with a team including someone with the name “Nobby”.

It is now 30 years since I acquired my first copy of the international athletics annual, and still Peter Matthews, the one-time editor of the Guinness Book of Records and BBC Radio and ITV Sport commentator is, with the help of the Association of Track and Field Statisticians, producing an essential record of the previous track season and seasons past.

This is surely the record book that various athletes down the years have “rewritten”. Shame that no one has had a go at re-writing the Hack’s Book of Favourite Sporting Cliches. But I digress.

There are a good deal more asterisks besides performances in the 2014 edition than there was in the 1982 version that gathers dust on my bookshelf (indicating those performances that we now know were truly as unbelievable as they might have been unachievable), and to a large extent works such as this have been superseded by some excellent online statistical resources. And yet, for sheer speed of reference and ability to home-in on details such as the previous year’s performances, comprehensive lists of each nation’s leading performers and 2013 national champions, and those fact-rich all-time and 2013 performance lists, this is a volume that is never far from my keyboard when working.

Two other books which have arrived recently (and will be fully reviewed on this site in due course) are Brian Oliver’s The Commonwealth Games: Extraordinary Stories Behind The Medals, and Floodlights and Touchlines: A History of Spectator Sport, by Rob Steen.

Steen, the sports journalism lecturer at the University of Brighton, traces the sport we want to watch all the way back to the gladiators of Rome, through the Victorian era of colonial sporting exports, to the present day. Qatar merits barely a mention, so there might yet be cause for Bloomsbury to produce a second edition.

The slimmer paperback book from Oliver, the admired long-time sports editor of The Observer seeks a less comprehensive approach to its subject, instead highlighting the many outstanding sporting achievements and quirks offered up by what was founded as the Empire Games and which have survived, though never prospered financially, through the end of Empire and into the post-imperial period.

It is hard to imagine now, 60 years on, that all the drama of Bannister v Landy in the mile and Jim Peters’ collapse at the end of the marathon all happened on the track in Vancouver on the same afternoon (try getting all that into a 600-word report, with quotes…), and it is good to see Oliver look into more of the story of Dorothy Tyler.

Tyler’s athletics career straddled the pre-war and post-war periods, and in 2008 she proved to be one of the SJA Sports Awards’ most memorable of guests. Oliver gives her story due prominence nearly 80 years after the Londoner won her first Empire Games high jump gold medal.

Glasgow 2014 will do well to unearth characters and competition as enthralling and entertaining as Oliver writes about from previous Games. But somehow, you know that they will.