Off the plane from the Delhi Commonwealth Games, DAVID HARRISON reflects on the contrast between the conditions enjoyed by competitors and the abject poverty of India’s poor

Splat!  The bird dropping landed square on my right foot, covering my trainer in a slimy, thick brown substance.

Out of nowhere came a shoe-shine boy offering his services. Talk about being in the right place at the right time. Michael Owen in his prime would have been proud of him.

There was nothing I could do but to use his services and he set to work with his rags, a toothbrush, a strange liquid concoction and considerable enthusiasm.

To be fair to the chap, he did a good job and my trainer came up looking as good as new. “How much?” I asked.

Now I am all for enterprise and endeavour but nearly 12 quid to clean some bird shit off a trainer was taking the, err, you-know-what.

Bartering is a way of life in India and I got him down to 200 rupees and went on my way.

The street traders and hustlers began to encroach into the daylight as the Delhi Games progressed. 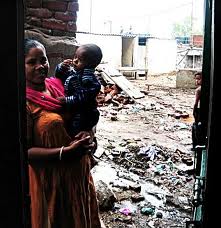 They come in all guises. Like the tiny girl, no more than six years old with big brown eyes, who leant into my tuk-tuk as it stopped at some traffic lights on my way back from a venue. She was waving three brightly coloured pencils my way and wanted 30 rupees for them. How could you resist?

Another example of desperate people, desperately seeking to eek out an existence with a captive audience on their doorstep.

Having said that, the tuk-tuk drivers will be able to retire to a life of relative luxury now the Games are over. They have been charging 60 rupees for a journey which, we are told, would normally cost 10. Good luck to them.

It has been estimated that 42 per cent of India’s 1.15 billion population live below the poverty line. Believe me, some of the poverty is devastatingly squalid.

Towards the end of the Games, my cab driver took a detour through the old part of Delhi, where Games organisers had erected huge hoardings to mask the living conditions.

Unfortunately some of the hoardings had started to fall  (or had they been ripped?) down. Behind them are narrow passageways with tarpaulin sheets, stretched across rat-infested, decaying brickwork, which families call home.

I bet London Olympics chief Seb Coe did not see this when the 2012 road show rolled into town this week.

Instead, Coe was busy touring the Athletes’ Village and observing: “I spoke to any number of athletes. They reported pretty favourably.

“They thought the Village was as good as a Village as they’ve stayed in. The next question you ask is what about the food? The food is excellent.”

There was probably enough food devoured daily by fit and healthy athletes to sustain India’s starving for a couple of years or more.

But such is life in this country of staggering diversity.

Coe blathered on about London leaving a track and field legacy after London 2012 and to ensure that facilities had a long lifespan after the Games.

I missed his press conference but it would have been tempting to ask about the lifespan of India’s starving.

But maybe that would have meant putting my foot in it for the second time in a couple of days.

David Harrison writes for the News of the World. This is an edited version of an online column that first appeared on the NotW website and is reproduced here with the author’s permission

For previous coverage of the Delhi Commonwealth Games, click here