Simon Hughes played the first innings of his county career for Middlesex at the St Lawrence Ground in Canterbury, where he had spent many summers watching the great Kent sides of the 1970s. 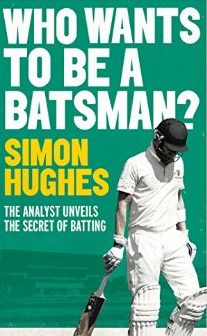 It didn’t end well. When he got down the other end, Hughes looked for spin that wasn’t there from part-time bowler Graham Johnson and his off stump was knocked back. A four-ball duck.

On returning to the pavilion, a boy approached Hughes. “Can I have your bat?” he asked.

“Because you aren’t using it.”

That set the pattern for Hughes as a batsman. He finished a 13-year county career at Middlesex and Durham with a batting average of less than a dozen and top score of 53.

It is only fair to point out that his success with the ball took Hughes to the brink of England Test selection, and since his retirement as a player, he has forged a career as a broadcasting analyst of the game. In this book, Hughes turns the spotlight firmly on the art he found himself unable to master.

He tried hard enough and had plenty of good role models. He idolised Colin Cowdrey, the former Kent and England skipper who seemed to persuade the ball to the boundary rather than hit it. He tried to emulate Cowdrey’s stance, with feet apart and bat between pointing just wide of mid on. It never worked.

Hughes tried to copy Don Bradman. The greatest modern day batsman of them all stood with his bat face pointing towards his pads. When Hughes tried it, the results were flying bails and cartwheeling stumps. Back to the drawing board.

“I know nothing about style,” Bradman said. “All I’m after is runs.” And he certainly got them. With 29 hundreds in 80 Test innings, he was the most prolific batsman international cricket had seen. He would have retired with a Test average exceeding 100 had he not got out for 0 on his final Test at The Oval.

Strangely comforting for the rest of us that Bradman should have made a duck. Dean Jones echoes Bradman’s take on the art of run-scoring: “It’s not a case of how, old sport, it’s a case of how many.”

Kumar Sangakkara follows Bradman in the list of Test centurions, with 38, but the Sri Lankan achieved his tally in 225 appearances – one every 5.92 innings. Bradman made a Test century every 2.75 innings.

Then there’s the other side of the coin. The batsmen who wasted their time buckling on pads. Like New Zealand’s Chris Martin who made 36 ducks in 71 Tests for an average of 2.36. Martin comfortably took more wickets than he made runs.

Of course batting is not as easy as the likes of Bradman and Cowdrey once made it look. Hughes has established that an 80mph delivery – average pace for a fast bowler – travels at 117 feet per second. So it takes half a second to travel 22 yards, the length of a pitch. By the time the batsman has focused on the ball, it will be in a different place.

To develop this theme, Hughes includes a chapter on “The A & E Years”, when the fast bowlers of the West Indies and Australia forced some international batsmen to take out season tickets at their local hospital’s fractures clinic.

With helmets and various pads, a batsman’s protection nowadays is so comprehensive that barely an inch of the player is visible as they stride to the wicket. Yet even with such padding, the batsman’s life can still be at risk, as the shocking Phil Hughes incident showed.

Like protection, batting is improving constantly, especially in one-day cricket. Ramp shots, reverse sweeps, slog sweeps and all sorts of new strokes that Bradman and Cowdrey would never have considered playing have all been introduced.

They would have marvelled at AB De Villiers 31-ball century against West Indies, where the “Nervous nineties” were by-passed in four balls as he sped from 82 to 104.

Hughes conducts in-depth interviews with batting conundrum Mark Ramprakash and the prolific Sangakkara to learn more about the ins and outs of top-level batting in a book that never forgets the anecdotes among the serious stuff.

In 1997, Hughes won a book award for his account of life on the county circuit A Lot of Hard Yakka. This latest offering cannot be far behind.