From Pickwick Papers to their European exploits spread across the back pages of the tabloids, the first 150 years of  ‘the original reds’ offer many fascinating football stories, as ERIC BROWN discovered

The shadow of Brian Clough still looms large over Nottingham Forest although nearly a quarter of a century has passed since he retired and 12 years have gone since his death.

He is believed by many, including myself, to have been the finest manager ever in the English game. Through an ability to transform players who were previously rated as “ordinary” into a team of world-beaters, Clough dragged a moderate provincial club up by the boot-straps and made them Kings of Europe. Twice.

It is no wonder that the city honours Clough with a statue in Nottingham, just as it does Robin Hood. It must be hard for them to decided who is their greater legend.

But Forest club historian Don Wright’s tale Forest Forever is not just about Brian Clough, who in any case is already celebrated in excellent books by John Sadler and Duncan Hamilton. No, this book, published to mark the 150th anniversary of what it calls “the Original Reds”, is the complete story of Forest BC (before Clough) and PC (post-Clough), as well as during those heady Clough years.

What emerges as remarkable is the number of figures during this fascinating history who devoted much of their working life to Forest. Clough spent 18 years at the helm. Billy Walker, the club’s first manager, had the job for 21 years, from wartime to the launch of the Beatles.

The first great Forest personality was Samuel Weller Widdowson, a goalscorer who represented England during his Forest career between 1866 and 1885. Widdowson, named after the Pickwick Papers character by his Dickens-reading father, had a hand in Forest’s formation, became a long-term Forest committee member, club chairman for five years, an England player and selector, referee, administrator, oarsman, Notts County cricketer, and a useful quarter-miler. Oh, and in 1874 he entered football history as the guy who invented shinpads. 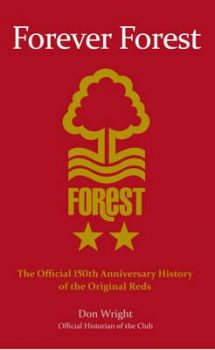 Indeed, there seems to be enough material on Widdowson that he might merit a book in his own right. He was referee when goal nets were used for the first time and he even played a part in developing the referee’s whistle. In between all that, he somehow found time to run a lacemaking business and become director of a local cinema.

Wright, a former editor of the Newark Advertiser, now aged 80, spent a year ferreting through the official records and compiling interviews, with past players and club figures, or their remaining relatives.

He credits Walter Roe Lymbery with being the founding father of Forest but Widdowson was obviously a powerful force in establishing the club, the second oldest football league club in the world. The 15 young men who met at the Clinton Arms, Sherwood Street, in the autumn of 1865 could not have dreamed they were launching Forest towards future European glory.

But Walker had laid foundations by taking the club from Division Three South to the First Division and a 1959 FA Cup triumph with his successful youth policy.

Clough’s amazing achievements are well known. Who else could sign Kenny Burns, a 20-goal striker from Birmingham, and turn him into the best centre half in Europe? But as Wright’s history points out, there are some big names who barely managed a walk-on part in Forest’s tale. Who remembers Charlie George, John Terry, Asa Hartford, Ian Wright, Stan Bowles and Aaron Ramsey in the Garibaldi red?

After Clough, Forest struggled for stability and paid the price. Forest became the first former European champions to drop into the third tier of their national league.

It was all a long way from the Clough glory days. Whatever Forest do in future, they will struggle to escape Clough’s shadow.