Nobody who shared desk space with Malcolm Folley and his frenetic work ethic could ever have believed that retirement with his family, his dog and his golf clubs would entirely silence him.

Not even the idyllic contentment he enjoys in the vineyards – and more pertinently their produce – next to his holiday home in the south west of France was likely to restrain him from some spirited foray back into sports writing. 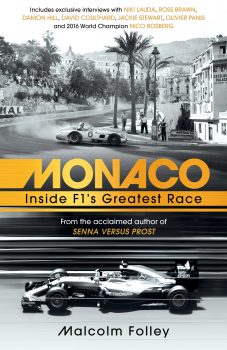 And so Folley, an SJA member since 1976, has duly served up his seventh, and he thinks possibly final, book: Monaco – Inside F1’s Greatest Race (Century, £20), a gripping evocation of glamour and danger and champion drivers.

Dusting off a contacts book compiled during 39 years as a staff writer at the Mail and Express stables, Folley thankfully eschews a race-by-race, year-by-year history of Monaco, a potentially stodgy affair, and instead expertly succeeds in fusing together all the many glitzy strands that have brought Monaco’s ribbon of tarmac to life since the race was first staged in 1929.

Folley was not quite there at the start, his first race coming in 1981. He has been back 25 times or so, his last visit falling 12 months ago, when he caught up with several of the key figures in the Monaco story, including David Coulthard, a twice winner of the race, who proves to be Folley’s eloquent chauffeur as he drives him around the famous streets in a road car, among the buses, trucks and Ferraris that trundle or slink around the place all year round.

Folley also speaks, among others, to Niki Lauda, Ross Brawn, Damon Hill, Sir Jackie Stewart and champion Nico Rosberg, a three-time winner who will be in the Principality as a spectator rather than as a competitor when the race is run later this month, having retired five days after winning the title.

Rosberg’s old ‘pal’, Lewis Hamilton, appears to be off-limits for a sit-down debrief, but Folley talks at length to an unlikely hero at the heart of the book: Olivier Panis, the Ligier driver from France, who won the most unexpected victory in the grand prix’s history, in the wet in 1996, when just three cars finished. His place in folklore is dramatically retold.

Stepping away from race day itself, Folley considers whether Bernie Ecclestone charged Monaco a fee to stage the event. The little dictator always claimed he did not, saying Monaco gives more to Formula One than Formula One gives to it, by way of stardust that sticks. But that gratis arrangement is questioned in the 351 pages.

‘Sometimes we read in the press that Monaco does not pay for the Grand Prix,’ Folley quotes Michel Ferry, a silver fox Monegasque and a high-up at the Automobile Club de Monaco, as saying. ‘But we pay a lot – around the same as Monza pay.’

‘Even so,’ expostulates Folley, recording how Monaco uniquely keeps a percentage of its trackside advertising revenues, ‘surely Ecclestone offers Monaco a more favourable deal than the contracts proffered to governments in Azerbaijan, Singapore and Abu Dhabi, for instance? When all is said and done, Monaco has the best commercial deal.’

Folley’s research is prodigious, while his knowledge and understanding of Formula One’s rhythms and characters adds context and meaning to a narrative as redolent of Monaco as a harbourside cocktail.

Folley back in fast lane thanks to Monaco passion