He was the father of cricket, a colossus who dominated the sport in an era when lunch breaks lasted until the port ran out. Eric Brown reviews the latest book on W G Grace.

There can surely be no other man who has dominated his chosen sport so completely and for so long as “The Doctor.”

As a precocious teenager W G Grace opened the bowling for South Wales against Surrey Amateurs at The Oval. At 50 and straining the scales at more than 20 stones he was still skippering the full England team. In between he had become without dispute the greatest and best-known cricketer in the world.

Known as the father of cricket, this colossus left his giant shadow cast across a sport still in thrall to his many achievements even today. Some measure of his stature can be gained from the fact that in 1948 Don Bradman insisted on leading his touring Australians on a pilgrimage to Elmers End cemetery in Kent where they paid homage at the great man’s grave.

Grace played in a very different world where county cricket was still in its infancy and aristocratic owners of grand country houses paid enormous sums for talented players to guest in their all-star elevens. He readily accepted their shilling as well as payments for organising and playing on overseas tours yet somehow remained an amateur “gentleman”.

He helped establish the Gloucestershire County Club but near the end of his career failed to get a Crystal Palace-based London County Club off the ground. His world looks slightly comical today.

Playing at Lord’s, a contemporary report describes how one of his firm hits sent the ball scudding across the outfield, under a fence and through the open door of a stable. Grace and his partner continued running until they reached double figures and the ball was found.

Writing a book about W G Grace is fraught with danger. There is already a whole shelf full of books about the master. At least 14 bear his name in the title.

But MCC member Anthony Meredith, a former contributor to The Cricketer magazine, has produced a welcome addition to the Grace genre which will find new devotees now it is available in paperback. 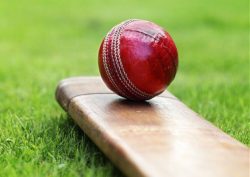 His W G Grace – In The Steps of a Legend also avoids another trap. Books on Grace can easily deteriorate into a litany of statistics based around his unrivalled batting and bowling.

Meredith steers clear of this by concentrating on the places Grace lived and played, visiting many to describe them in their heyday and how they appear now. His life as a member of the formidable Grace family is another central theme although, of course there is still plenty of room for his cricket.

The author corrects many errors that have passed as fact concerning Grace over the years. He casts doubt on whether some of the episodes associated with Grace actually occurred.

Such as the day he was clean bowled for nought to the dismay of a large crowd but simply bent down, replaced the dislodged bail and carried on batting after saying to the perplexed bowler: “They have come to watch me bat, not to watch you bowl.”

Meredith has done a magnificent job bringing alive an era when batsmen often celebrated centuries by having champagne delivered at the wicket, lunch breaks featuring roast joints lasted until the port ran out and huge bets were placed on Grace’s various elevens beating the best 22 men of certain counties.

W G Grace – in the Steps of a Legend by Anthony Meredith is published by Amberley Publishing. Price £9.99 paperback.