One day back in the 1970s, Clyde Best sat in the Upton Park dressing room opening his fanmail along with other West Ham players during a regular Friday ritual.

Best, built like a brick outhouse but blessed with a decent touch, was a popular figure at the club and had plenty of letters to sift through. The usual stuff. Autograph requests, pleas for match tickets and signed photographs.

Suddenly Best froze. His blood ran cold. There in front of him was a written threat that as soon as he emerged from the Upton Park tunnel for the match next day he would have acid thrown in his eyes.

Suddenly Best froze. His blood ran cold. there was a written threat that as he emerged from the tunnel for the match he would have acid thrown in his eyes

Bermuda-born Best had grown accustomed to racist abuse from fans back in those unenlightened times and had become adept at shrugging them off.

But here was a threat that simply couldn’t be ignored. He considered telling his captain Bobby Moore immediately but then decided he ought not to worry his dressing room colleagues. He reported the incident to manager Ron Greenwood and told no one else.

He even decided against telling his family.

Best considered who could have sent such a letter. He reasoned it could not have been a West Ham fan as he got on so well with everyone at the club both on and off the field. He thought someone must have formed a grudge against him because of the colour of his skin.

When he came to run out for the match, Best noticed a security cordon lined up on both sides of the tunnel. It did little to calm his nerves. “I was still scared as hell, thinking if you are going to throw acid at me please don’t mess with my face,” he writes. “I’ve never run so fast during a game in my life. I just couldn’t stand still for a minute. I had to keep moving. It was as if I had been threatened by an assassin planning to hunt me down and finish me off. ”

At the end of the game, another cordon formed in the tunnel and when he reached the dressing room Best finally heaved a sigh of relief. “It was the worst experience of my life as far as racism is concerned. I couldn’t just say I’m not going to play. I had to play through it. I have no doubt the letter was genuine, it was someone who knew what they were doing.”

The strange thing is, Best cannot recall who West Ham played that day or the result. He has almost complete recall about other incidents and games but oddly has no memory of the details surrounding the worst day of his life. He also describes keeping a comprehensive scrapbook throughout his career on which he draws heavily for the book. 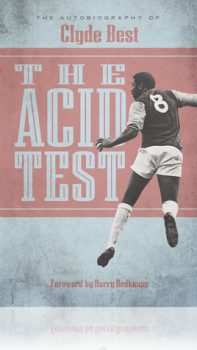 “They used to say no black player would ever make it in English football,” he writes. “It was said we couldn’t take the weather and the heavy pitches. Well, we proved them wrong.”

Best found himself a pioneer for black footballers in England when he tore himself away from sunny Bermuda’s pink-sand beaches for a West Ham trial. In August 1968 a 17-year-old Best, first capped by Bermuda two years earlier, flew into Heathrow.

No one from West Ham was there to meet him and Best contemplated flying straight back home. But he did not have the fare. Best eventually grabbed his suitcases, headed for the tube and naturally got off at West Ham. With darkness falling he found himself still a long way short of Upton Park where he should have alighted for the ground. Luckily, he bumped into a stranger who directed him to a house “where one of the West Ham players’ mothers lives”.

It turned out to be Mrs Jessie Charles, mother of John and Clive, who instantly offered him a bed for the night because she knew by that time the ground would be deserted.

So began a long and happy relationship with the Charles family and a fine career with the Hammers. Best scored 58 goals in 213 starts after slotting in quickly alongside World Cup heroes Bobby Moore, Martin Peters and Geoff Hurst.

Greenwood described him as “the finest 17-year-old I have ever seen”.

Football writer Andrew Warshaw’s tale of trailblazer Best does not end in England but also embraces his final playing years in America, Holland and Canada. It’s an unusual tale, with Best picking up honours from Bermuda and FIFA as well as collecting an MBE.

Best’s part in the evolution of English football is acknowledged in a final chapter including tributes from luminaries like John Barnes, Garth Crooks, Gordon Taylor, Ian Callaghan, Sir Trevor Brooking and Tony Cottee.