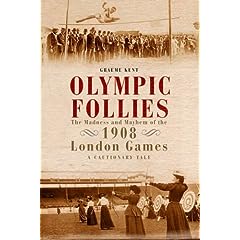 Once upon a time, the last Olympic event was the race to get a book about the Games into print. Former SJA president Chris Brasher often led the way in the 1960s and 1970s.

Perhaps the advent of television and the internet has rendered such endeavours obsolete, or is it more cautious publishers, as the book market has been swamped by tame, ghosted “autobiographies” of footballers and “celebrities”?

It is always a delight, therefore, to hear of a new work on Olympics past, and especially in the year when the centenary of the London 1908 Games is celebrated, so I was keen to see Olympic Follies by Graeme Kent, published by JR Books, sports enthusiast Jeremy Robson’s new imprint, for myself.

anecdotes about the personalities involved. And the raw material was certainly there: London’s first Olympics remains the longest Games in history, the most successful ever enjoyed by Britain, and had scandal aplenty.

Yet simple errors throughout sadly detract.

Sensibly, the book tries to set those London Games in context, reviewing attempts at Olympic revival with particular reference to Britain. But although the author makes reference to the National Olympian Games of 1866, he describes WG Grace, who won the 440yds hurdles at the meeting, as a 17-year-old, when Grace was in fact 18.

The inspiration behind the Much Wenlock Games is incorrectly spelt “Brooks”. Kent also has the 1906 Athens Games taking place in August. They were held in April.

As well as checkable facts not being checked, there are also plenty of examples of careless writing or editing. It was Upton Park (and not Upton, as Kent has it) that won the 1900 Olympic football final. Manchester United did not win the first Football League championship in 1908, but their first title.

The rugby section says the Australians’ first match of their tour was against Wales, when the sides met on December 12, long after the Olympic match (which Australia won). France won the rugby competition (such as it was) at the 1900 Olympics, not 1904, as Kent has it.

It is all a great shame because the anniversary of 1908 presented a real chance to chronicle these Games well. This book does have some wonderful stories, but the whole package is tarnished by the errors.

Olympic Follies â€“ The Madness and Mayhem of the 1908 London Games a Cautionary Tale, by Graeme Kent, published by JR Books.