pre-eminent cricket writer and critic, Sir Neville Cardus, Celebrant of Beauty. With introductions from figures as diverse as Daniel Barenboim and Freddie Flintoff, the book endeavours to reflect Cardus’s life and work

In the history of British journalism there has been only one writer so evocative and respected, and so widely quoted, in two such diverse fields as cricket and music. The name Neville Cardus still stirs aff ection in the hearts of lovers of music and cricket, and anyone who cherishes the art of fine and enduring English prose.

For Cardus, an art and a sport were entirely compatible pleasures in a rich and many-sided life. His greatest pleasure was to go by taxi from the press box at Lordâ€™s to an aisle seat in the front of the stalls at Covent Garden, and then describe his delight in both events in his inimitable style.

It is hard to believe that so majestic a writer left school at the age of thirteen.

John Frederick Neville Cardus (1888â€”1975) was born in Rusholme, Manchester. He never knew for certain who his father was. The women of the home took in laundry, and supplemented the family income at night:

â€œEvery evening my beloved Auntie Beatrice would doll herself up, belladonna encircling the eyes, rouge on her cheeks, feather boa around her neck, silk stockings, petticoats just to be glimpsed. Then she would proceed to, or sail down, Manchesterâ€™s Old Street to pick up clients.

“One night she returned in a flurry to our tenement-block house, and shouted: ‘Jessie, Iâ€™ve forgotten me French letter.’ I was puzzled by this because, child though I was, I knew for sure that Aunt Beatrice could not speak one word of French.â€

He was raised in a home with few books, no piano, and little interest in sport. After only four years at Board School, he educated himself at local libraries in the arts, philosophy, and English and European literature. Early jobs included working as a pavement artist, selling chocolate bars in a music-hall, boiling type for a fi rm of printers, and toiling up and down streets of grimy back-to-back tenements selling insurance premiums to cover funeral expenses and collecting weekly payments. All the while he longed to write, and kept his vision alive in spite of having many articles rejected.

At the age of 29, he became private secretary to CP Scott, legendary editor of the Manchester Guardian, famous for the editorial in which he wrote “Comment is free, facts are sacred”.

Cardus wrote about his twin loves for the MG for almost 60 years. He was the first music critic and the first cricket writer to be knighted. Here is a man who transcended his roots, and yet continued to gain sustenance from them.

He developed a style of writing that was intuitive, richly felt, evocative of colour and atmosphere, and insightful about the character of player or musician. He wrote 10 books on the summer game, 8 on music, and 3 volumes of autobiography. Howard 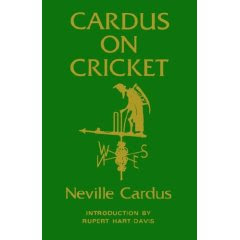 Spring said of the first volume (titled Autobiography): â€œNeville Cardus has written one of the few great autobiographies of our timeâ€. Days in the Sun, The Summer Game, and Good Days have become classics of cricket literature.

Cardus was a friend of other famous writers (such as JM Barrie and JB Priestly), cricketers (CB Fry, Don Bradman

Being fellow-Lancastrians was the first of many points of contact between Neville Cardus and Robin Daniels: they shared a passion for Mozart, literature, and Lancashire cricket. Robinâ€™s book Conversations with Cardus was nominated by the Sunday Times as one of the best books of the year.

Now â€” with the perspective of time, and with deepened knowledge of both music and human nature â€” Robin Daniels has written this sequel, a memoir of his friend.

This is a book of charm and insight, combining personal memories, relevant biography, reflections on music criticism, appraisal of Cardus (the man and the writer), and a superb selection of the many gems to be found his writing.

Half of the net royalties will be shared equally between Cardusâ€™s two favourite organisations: the Academy at Lancashire CCC â€” to help it find and coach talented young players; and the Charles HallÃ© Foundation to help spread the love of music through concerts and education.

Daniels’ book is due to be published on July 3. Copies may be obtained from bookshops or have it sent to you direct from Booksource, by calling 0845 370 0067.

For further information about Cardus, the book, author or launch, contact Robin Daniels on 01524 811788