David Lloyd must be cricket’s greatest all-rounder. Not in the Gary Sobers sense, you understand, but because “Bumble” has
had more roles than a Cecil B De Mille epic movie.

To think that before all that, he had an apprenticeship as a plumber’s mate, and when he signed for Lancs, it meant he took a pay cut worth £1 a week that he had been earning for being a county nets bowler.

As a left-handed opening batsman and slow left-arm bowler, Lloyd had impressed Lancashire with promising performances for Accrington. Together with Clive Lloyd, Barry Wood, Jack Simmons, Peter Lever and others, Lloyd would form the basis of the Lancashire side that was among the first counties to really grasp how to play one-day cricket in the 1960s and 1970s.

Lloyd wasn’t just an all-rounder on the cricket field, either. Lloyd’s off-season jobs at one time or another included working as a car mechanic, for a double glazing company and for a brewery, plus a role as non-executive director of his beloved Accrington Stanley FC, where his fundraising efforts helped save the Football League’s founder members from another bankruptcy.

With such a vault of varied and colourful material it’s no wonder freelance journalist Richard Gibson has ghosted such an entertaining Lloyd autobiography, Last In The Tin Bath, which is now out in paperback.

The on-field incident for which Lloyd is remembered most widely gets generous exposure here. 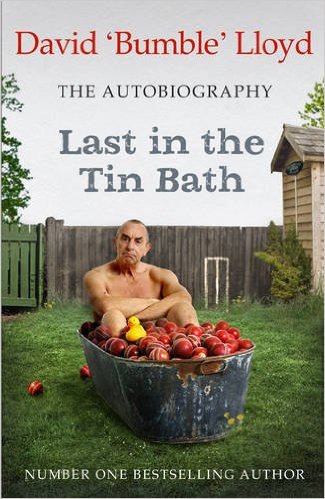 This was at a time before batsmen wore helmets, and no one would have dreamed of wearing the sort of body armour they go to the crease equipped with today.

So when Thomson speared in one of his quickest deliveries on one of the quickest wickets, at Perth, Lloyd missed the ball. It didn’t miss Lloyd, though. The delivery, at approaching 90mph, crashed into Lloyd’s abdominal protector. The  plastic box split and then almost immediately clamped shut again round Lloyd’s genitals.

The photograph of Lloyd, in eye-watering agony on his hands and knees immediately after impact, taken by SJA member Patrick Eagar, is one of the best known in the game.

Lloyd explains why he blames himself for the crippling incident, admitting he was wrong to play with a neck injury which affected his back, limiting movement at the crease and preventing him getting into the correct position to face Thomson’s javelin-thrower action.

There are myriad stories and anecdotes from county and international dressing rooms but I found Lloyd most entertaining on his early days.

People of a certain age will recognise Lloyd’s nod to his humble beginnings with the book title. From such a humble start blossomed a career which allowed Lloyd to rub shoulders with cricket royalty. He gives an insight into the Lancashire and England dressing rooms, discusses the politics of the game, the colourful characters he has met, and he doesn’t duck controversial issues such as the sackings of Peter Moores and Kevin Pietersen from the national side.

A perfect read for that late summer holiday.