ERIC BROWN reviews a book about a little-known piece of football, and social, history

Patrick O’Connell seems to have been largely forgotten by football. Yet his illustrious CV includes playing spells at Hull City and Sheffield Wednesday, as well as the captaincy of Manchester United and Ireland.

O’Connell’s managerial feats included winning La Liga with one of his four Spanish clubs – and saving Barcelona from bankruptcy. 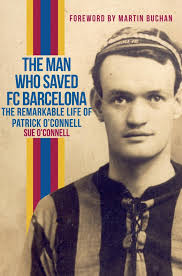 Despite raising cash so Barcelona could survive to employ the likes of Johan Cruyff, Lionel Messi and Pep Guardiola, O’Connell died destitute in 1959.

His sporting achievements were overshadowed by the global events, but Sue O’Connell’s book at last recognises his place in football history.

Sue O’Connell is the married to Patrick’s grandson Mike. She has spent many years bringing alive a colourful career most of today’s pampered stars would give their Ferraris for.

O’Connell, born in Dublin in 1887, worked part-time in a flour mill, often feigning illness so he could play for Liffey Wanderers on Saturdays. A strapping centre forward, O’Connell soon caught the eye of Belfast Celtic and launched his professional career there.

That career progressed at Hull and Sheffield Wednesday before Manchester United paid a whacking £1,000 transfer fee for him in the summer of 1914. O’Connell received 10 shillings.

O’Connell soon started rattling in the goals for United but became caught up in an infamous bribery scandal the following year.

On Good Friday 1915, relegation-threatened United faced Liverpool, comfortably placed in mid-table. United, including O’Connell, won 2-0 in an unchallenged fashion. A contemporary report suggests that one Liverpool defender berated a teammate for trying to score. Rumour had it that the result was decided in a local pub seven days previously – a theory supported when a penalty shot nearly hit one of the corner flags.

An FA inquiry followed but by then minds were distracted by events in France.

Nearing the end of his playing career, O’Connell left Old Trafford in 1919 for Dumbarton and a couple of years later moved into management at Ashington.

By October 1922, he had packed his battered leather suitcase yet again to become manager of Racing Santander. Soon he moved on to Real Oviedo, then landed in Seville where he managed Real Betis to their only La Liga triumph.

“Don Patricio” had become a famous figure in Spanish football circles and was wooed by Barcelona’s Josep Sunyol. Club president Sunyol’s assassination at the outbreak of Civil War in 1936 plunged Barca into financial crisis.

Barcelona needed cash desperately to survive and decided only a rigorous tour could provide it. O’Connell led his team out of war-torn Spain (no mean feat in itself), on a journey to Mexico, Cuba and New York. The $12,000 raised pulled the club back from the brink.

During his Spanish adventure, O’Connell had met and married Ellie. He forgot to mention he already had a wife Ellen and four children back in Manchester…

During his Spanish adventure, O’Connell had met and married Ellie, an Irish girl working as a nanny to diplomatic families. He forgot to mention he already had a wife Ellen and four children back in Manchester…

The book lifts a veil on this less picturesque side of O’Connell’s life, where his family struggled just as desperately for survival as Barcelona.

Unable to manage on the small cash sums O’Connell sent them, they ran up debts with local tradesmen and often hid when the rent man knocked on their door.

O’Connell never visited his Manchester family and his reluctance even to acknowledge their existence tarnished a golden football record. Eventually his bigamous wife discovered the truth and walked out leaving him to die in England where he had lived his final years with his brother.

As the author says, “Patrick O’Connell was an outstanding sportsman but as a husband and father he was a non-starter.”