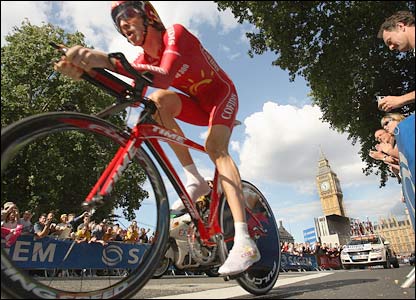 Multi-world champion cyclist Bradley Wiggins won two gold medals in Beijing, including a stunning world record, making him one of the leading contenders for the title of SJA Sportsman of the Year. He is profiled here, in an fascinating interview with award-winning DONALD McRAE, published in the Guardian

On a beautiful September afternoon in a quiet Lancashire pub, with the sunlight filtering through his chilled glass of Chardonnay, Bradley Wiggins traces his journey back into the darkness. Beyond the recent elation and glory, with two of his three Olympic gold medals won only last month in Beijing, Wiggins bears down on the murkiest corners of his past.

He begins slowly and nervously, his finger smearing the beads of condensation on his glass, for this is a path smudged by struggles of the mind rather than the pure clean burst of sporting achievement that left us breathless in Beijing. “Part of me worries about upsetting people,” he admits, “because we all have perceptions about Olympic champions. I’ll probably disappoint some people because this is not always a rosy story. But it’s important to show that, off the bike, I’m an ordinary person with the same problems we all face in real life.”

It soon feels as if Wiggins is back on a speeding bike with his words whirring like his churning legs. For a long time he talks as he rides, fast and easy, tearing through the laps of a life story that moves from an abandoned mum and her son on a London council estate to the Olympic podium. He puts his head down when the pain is jagged, and it looks as if his heart might burst, but he closes on the truth with unerring intent. Ripping past his alcoholic father, a professional cyclist from Australia who died this year, he pedals over the blurring mountain of drink and depression that defined his return from the 2004 Olympic Games. And it is here, finally, that he pauses to examine the contrast between then and now.

“I’m surprised how different it has been this time. After Athens it seemed as if there was little real recognition but now it’s overwhelming. People come up to me in the street and use words like ‘legend’. That means a lot because I drive myself to win that respect. And that’s not being recognised as a celebrity, as someone who has been living in a [Big Brother] house for 10 weeks, but for something very real.”

In 2004 that dearth of recognition was intensified by the sheer incomprehension among those who already knew him. “Round where we lived people would say, ‘What are you still doing here? Brad’s a millionaire now.’

I had that same misconception. When I won gold in Athens I said to my wife, Cath, who was pregnant, ‘This baby of ours will never want for anything.’ There was real pride in that – but it just didn’t happen.

“You end up trying to give the perception you’ve got a bit of money. ‘Yeah, it’s great, lots of offers rolling in …’ The reality was quite different. I woke up every Monday morning and we were still overdrawn and I’d think, ‘God, I don’t feel like riding my bike again.’ There was a bitterness that nothing had changed after all the hard work but it went deeper than that. I’m not saying I was clinically depressed but there were definite bouts of depression – and lots of drinking.”

In his compelling new autobiography Wiggins reveals the depths to which he plummeted during a post-Olympics “nine-month bender”. He is just as unflinching in person, even as we enjoy a much calmer few drinks together. His Olympic team-mate Rebecca Adlington, the teetotal swimmer, might have been stunned to learn that her two golds in Beijing resulted in the renaming of a pub after her in Mansfield but the 28-year-old Wiggins has done enough drinking to warrant more than the coincidence of our meeting up in a refurbished establishment called The Wiggin Tree. They should just call it The Wiggins – unless they are unsettled by the cyclist’s candid admission of his excessive drinking in 2004.

When his pregnant wife was at work he would wander down to his local just before opening time on weekday mornings. He would often sink a dozen pints before, six hours later, staggering home to prepare supper and open a bottle of wine.

“I drank because I enjoyed it. I was happy sitting at the end of the bar on my own, reading the paper. I’ve always enjoyed my own company and that stems from riding alone. I never trained with anyone – and I still don’t. I’ve always been happy with my own thoughts and that sums me up as an individual-pursuit rider.”

If you are an SJA member and want to cast your vote for the 2008 Sportsman, Sportswoman and Team of the Year, click here and complete the easy-to-follow form.