A voice for the athletes, newly retired Paralympian Ellie Simmonds is using her career and experience to inspire the new generation of Paralympic swimmers.

The recipient of the Spirit in Sport Award at the Sports Journalists’ Association’s British Sports Awards, Simmonds has been the GB poster girl for the Paralympics since her debut in Beijing at 13 years old.

The five-time Paralympic gold medallist competed in the S6 events and hung up her goggles after her time in Tokyo 2020, noting that British para-swimming is ready for new faces.

“Swimming is a young sport and it’s really important that there is that next generation,” said the 27-year-old, who is now focusing on the future with her oncoming BBC documentary ‘Ellie Simmonds: A Life without Dwarfism’.

“I’m an athlete representative anyway so I’m a voice for the athletes in general but also I think, with the experience I’ve had, I try to be there for the team and be their friend.”

The leader of the British para-swimming team in one of the most unprecedented Paralympics to date, Simmonds played a significant role in encouraging athletes through Covid-scares and the absence of families.

She added: “It was a very lonely Games, and because I’ve got three other games to compare it against it was very different.

“For me it made me realise just how big of a part that friends and family play, when they’re normally in the crowd and being my support blanket.”

Receiving the National Lottery Spirit in Sport Award, the eight-time world champion was humbled by its meaning, as she passes on the torch to the future of the sport, Paralympic medallists Ellie Challis and Reece Dunn. 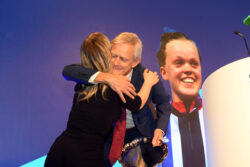 On receiving her award, Simmonds said: “When you’re an athlete, you’re in your own mindset and you don’t really think about the impact the sport could have and as athletes, that you can have.

“It’s a sport I love to do and now I’ve closed that door and I’m entering the next chapter in life, to get this award is a huge honour because we’re in a room full of amazing sports stars.

“I feel like I don’t deserve it in that sense because I was just a swimmer.”

Simmonds still plans to be cheering on the team at the World Championships and Commonwealth Games next year and isn’t giving up being that encouraging spirit yet.

She added: “I think swimming will always be a part of my life. I’m not closing that door fully, I still love it.”

Megan Armitage is a member of the SJA Academy, to get involved click here