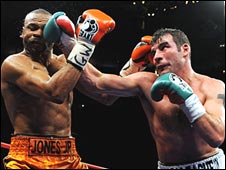 Joe Calzaghe, the SJA’s Sportsman of the Year in 2006 – recognition that came long before the Welshman deservedly collected the BBC’s Sports Personality title – last night made further claim to being regarded as one of the finest boxers of all-time by beating Roy Jones Jr in Madison Square Garden.

It was the 46th and possibly final victory of his career as doubts remain whether Calzaghe, at 36, will fight on.

Acclaimed after this latest performance by noted promoter Frank Warren

as “the greatest super-middlewight of all-time”, Calzaghe has a re-match clause in his contract, and may yet take on the American in Cardiff. Warren cast doubt on the possibility of a re-match over whether Jones would want such a contest after the beating he received by Calzaghe.

This was despite Calzaghe being floored in the first round by a Jones right hand, but thereafter assumed full control of the fight.

Calzaghe was cheered on by an estimated 7,000 British fans out of a crowd of 14,000, including Lennox Lewis and former foes Bernard Hopkins and Mikkel Kessler, both hoping to lure the Welshman into continuing his career.

“Yes, I was hurt, he caught me with a good shot. But that’s what being a champion is all about – when you’re put down on the floor, you come back stronger,” admitted Calzaghe after the fight.

As SJA members who have met Calzaghe and his trainer father, Enzo, at our sports awards in the last two years, out of the ring he is among one of the kindest and politest of sports stars, and as a past SJA Sportsman of the Year, he has an open invitation to our awards ceremony this, and every, year.

The 60th anniversary SJA Sports Awards, with guest of honour HRH the Princess Royal, takes place at The Brewery in London on November 26.

This year’s choice for Sportsman of the Year has been a daunting one for SJA members. As well as F1 world champion Lewis Hamilton‘s success, they have had to select from among Olympic gold medal-winners Chris Hoy, Bradley Wiggins and Ben Ainslie, world champion boxer Calzaghe, and footballer Ryan Giggs, after his Manchester United side won the European Cup.

Perhaps reflecting the enthusiasm for such a successful year of British sport, voting by SJA members has reached record levels in 2008, with half of ballots cast being completed online.

*UK Sport is the longest standing lead sponsor of the Sports Journalists’ Association, with a partnership that goes back more than a decade. Sky Bet is the SJA’s newest partner, the sponsorship being announced last month.

Both partners support the SJA’s two prestigious annual awards events, including the presentation of a special UK Sport Award for excellence at the SJA’s Annual Sports Awards and the sports betting writer of the year at the SJA’s British Sports Journalism Awards.

The SJA Annual Sports Awards are the longest established of their kind in the United Kingdom, having been first staged in 1949. The 60th SJA Sports Awards will be staged on November 26 in London.