We have already listed likely candidates for SJA members’ votes in the 2007 Sportswoman and Team of the Year awards, due to be presented at The Brewery on December 12. Now, Ian Cole offers his prompt list for the SJA Sports 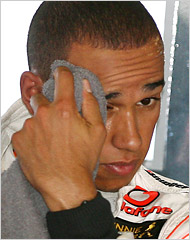 Lewis Hamilton, left, the first Formula 1 driver to stand on podium in his first nine races. Won the Canadian Grand Prix in only his sixth race and tops the drivers’ championship. title in January with points win over Juan Urango in Las Vegas. Then, in June, went back to Las Vegas to successfully defend his crown with a knock-out of Jose Luis Castillo.

The SJA Sportsman of the Year is determined by a ballot of all SJA members. Each member is allowed to vote just once in the three categories – Sportsman, Sportswoman and Team of the Year – and online voting forms are available now by clicking here, although you might want to wait a little while yet for further performances and to consider further prompt lists from Ian Cole. Here is the most recent Sportswoman candidate list, and here is a list of the outstanding candidates for the SJA Team of the Year award.

In the meantime , though, why not go ahead and book your tickets for the awards lunch, to be staged from noon on Wednesday, December 12, at The Brewery, Chiswell Street. Booking forms are available here. And remember – the Â£25 discount on ticket prices is exclusively available to fully paid-up members of the SJA (not bad, considering membership costs at most Â£23), so make sure you join the Association now by clicking here.