THE VIEW FROM TABLE 30 by ANTON RIPPON

Yes, of course, we have our Sportsman, Sportswoman and Sports team of the year awards. But, for me, the stars of this year’s awards – the 71st if my maths is correct (a grammar school teacher once described my efforts as ‘a long illness patiently borne’) were the winners of the Sport for Social Change Award, Salaam Peace, an organisation founded in Walthamstow as a direct response to the July 7 bombings in 2005.

Salaam Peace operates in some of the most diverse areas of the UK, and promotes positive images of British Muslims. With the greatest of respect to the household names that we also honour, this is what recognising the true value of sport is all about. The award is sponsored by Oaks.

I was also taken the acceptance speech of boxer Josh Warrington after he picked up the World Sport Achievement Award for outstanding achievement competing internationally. What an inspirational story he had to tell, about how, ahead of his bouts, his father would take him to venues in local leisure centres, so that he knew what to expect when fight nights came round.

When SJA President Patrick Collins presented his award to John Blackie, who has coached Dina Asher-Smith since she was eight years old, Blackie eschewed the opportunity to climb on to the stage, instead accepting the honour from the floor of the Pavilion and thus ensuring that the ever-obliging and good-humoured Jim Rosenthal had to go to him to conduct the interview. 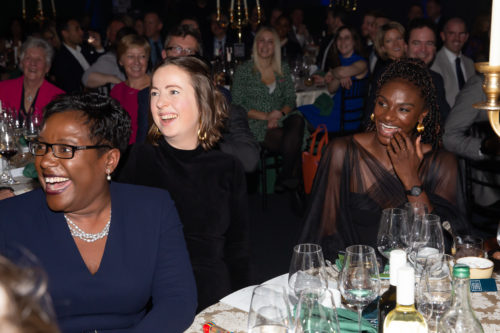 The SJA’s British Sports Awards event is always one to ink into the diary, even for us country members who have to fork out a fair few quid in train fare and even then have to book our ticket a month in advance – oh for those days when you turned up, asked a day return to the Smoke and still have change from a pound-note – only to discover that the Circle Line isn’t working – ‘Please wait for further announcements’ – and instead a cab driver lectures you on Brexit and tells you how ’Arry and Sandra once rode in this very taxi.

It is all worth it, though, once you have set foot inside the Pavilion and met up again with old friends like SJA stalwarts Ian Cole and Trevor Bond, and made new friends, as we did on Table 30, with photographer Peter Spurrier and boxing writer Paul Zanon.

James Green and his team at Start2Finish seamlessly put the whole affair together, as ever, and the venue is first-class, although for several years running now they have failed to provide a pot of tea. The food, however, is excellent, and they are very generous with the pre-lunch sparkling wine, which is more than can be said for the Grand Connaught Room to where we had to decamp in 2014 when the moat at the Tower of London was given over to the poppy installation that marked the centenary of the beginning of the First World War. It was that year at Grand Connaught Room that I locked horns with a head cocktail waiter who decreed only one ‘free’ drink per person. He lost. But that is another story …