After a year of outstanding achievements by British sportswomen, Craig Lord profiles one of the leading contenders

for a prize at the SJA Sports Awards: Kirsty Balfour, the first Briton to win the European 200m breaststroke title for 44 years

Just a year ago, it would have taken a leap of faith to pencil in Kirsty Balfour as a prospective champion: after missing the Olympic final in 2004, she then slipped to 18th in the world in 2005 over 200m.

But they say God moves in mysterious ways and this born-again swimmer with a passion for Christ and a growing self-belief to match now finds herself fifth fastest ever with a world No 2 ranking, a European gold and silver medal over 200 and 100m breaststroke respectively, and rated among the best British chances going forward to the Beijing Games in 2008.

Balfour, 22, sliced more than three seconds off her best to set the British record over 200m and take silver at the Commonwealth Games in Melbourne last March behind Australia’s world record-holder “lethal” Leisel Jones. With 2:24.04, Balfour was only just shy of the 2:24.03sec European record set by Hungarian Agnes Kovacs on her way to winning the Olympic title in Sydney 2000.

In Budapest in August for the European championships, Balfour raced lonely at the helm from start to finish. The last time the European 200m title came Britain’s way, the Cuban missile crisis had the world on edge and the Pope had just excommunicated Fidel Castro.

No chance of a schism in Balfour’s life: approaching the starting blocks in Budapest she recited Matthew 22:37: “Thou shalt love the Lord thy God with all thy heart, and with all thy soul, and with all thy mind”. In such passion does Balfour find inner quiet, confidence and calm.

“I’ve given my life to God,” says Balfour, Edinburgh born-and-bred. “Everything I do has a bearing. I believe things happen for a reason. What happened at the Olympics was a good thing. I think God has a plan for each of us.”

The intervention of Frederic Vergnoux may not have been divine, but the arrival in Edinburgh in late 204 of the French coach heralded the beginning of a new regime, one that has started to produce fine wine from the waters of the Commonwealth Pool.

“When I arrived in Edinburgh, I was not very impressed with the fitness level of the whole group,” said the coach who expects world-class swimmers such as his wife, Alena Popchanka, the 2003 world champion over 200m freestyle, to be “more rounded athletes”.

In addition to better skills in the water, Vergnoux opened the pool door and let the wider world in, taking his charges hillwalking, running, kayaking and adding weights to the mix. On a team camp in Canet, southern France, this summer, team games formed part of the training regime, while altitude training and cross-country skiing are planned for the future.

I don’t get bored … there’s no time to,” says Balfour. She talks through laughter of post-graduation plans of learning piano and Gaelic to fill the time once spent studying sports science. “I just want to go back to bed after training these days.”

Her coach is impressed with Balfour’s commitment. “Kirsty has never missed a training session,” he says. “It’s demanding – 10 sessions in water and 10 out some weeks, weights, pilates. Swimming is a hard sport. It can’t be 95 per cent, it’s full-time. All or nothing.”

Attitude starts at home. The youngest of four sports-loving sisters, Balfour’s ethic is inherited: Scott, her father, is an age-group world champion at triathlon, a sport he pursued with such vigour that it led him – with the blessing of wife Cathy, a teacher to blind children – to make a big career change after 30 years as a maths teacher. Pilates, yoga, fitness are the thing he teaches these days.

His daughter’s own sporting conversion has been both amazing and graceful, relying in part on a tweak in a great technique. Team Balfour consulted Milton Nelms, partner of Shane Gould, the 1972 triple Olympic champion, and a guru of water skills. In Melbourne, when all eyes were on the phenomenal perpetual motion that is Jones, few noticed that Balfour was also cutting a path of least resistance through an unforgiving element that fights those who fight it.

“When you race like that, it feels effortless and it gives you faith in your ability. You believe in yourself,” says Balfour.

Vergnoux sees his role in simple terms: “To me it’s not very complicated. My job is to make these guys who were fast before I came get faster still. 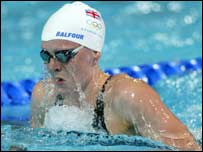 It’s not so much about teaching but about tuning, improving what they already do well. In terms of Kirsty’s breaststroke, we try to repeat things, and when there is an improvement, we look for something different to work on.

“It’s not rocket-science. I try to improve the things she does well and make them better.”

Back home in Fairmilehead, in the foothills of the Pentlands, Balfour likes to spend time with family and friends doing things “that make me feel normal…I’m still living at home with my parents. The separation from anything to do with swimming is important, finding places and things to do where you’re not thinking about swimming.”

All of which fits well with Vergnoux’s grand design. “The result in Melbourne was a big mind boost. It was a really big drop to 2:24.04, she just missed the European record. We have to carry on doing what we’re doing. Kirsty’s in the right place: she has her family around her, she goes to church, she goes to swimming, it’s stable, she is not a very complicated person. We are pretty lucky to be in Ediburgh. There’s not much media attention, no distractions. Everything is where it should be to achieve a lot better.”

Her Commonwealth Games swim is a blur for Balfour to some extent. “I can’t really remember that much about race. I couldn’t quite believe I’d gone that fast. It felt quite easy. But it always does when everything goes right. It feels effortless.” Now Balfour is looking to return to Melbourne, this time for the world championships next March, and another chance to take on Jones.

Vergnoux has promised Balfour more months of hard work and constant analysis. “We have to go back, analyse the things we did right, what we could get better,” he says.

“But right now it looks like we’re on the right road.” A question of keeping the faith.

Craig Lord is swimming correspondent of The Times

Voting is now open to SJA members for the Sportsman, Sportswoman and Team of the Year.

Review the other leading candidates in each category for your consideration:

To book your ticket for the SJA Sports Awards on December 13, click here.

And click here to fill in a membership form and put yourself forward to join the SJA.