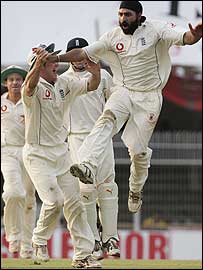 One of the biggest annual social events in British sport takes place on December 13: the SJA Sports Awards.

Ticket prices for SJA members have been frozen at £65 per member – a saving of £15 on ticke prices for non-members. So make sure you have paid your subs to take full advantage of the savings on offer.

Booking forms will be available to members shortly, and members will also be invited to vote for the Sportsman, Sportswoman and Team of the Year.

In the meantime, among the other awards to be presented on the night is the Peter Wilson International Newcomer of the Year, which last year went to rising tennis star Andy Murray. Previously, it has been won by boxer Amir Khan and triathlete Leanda Cave.
This year? We want your suggestions – add a Comment in the box below.

Here’s a few possibles that are likely to be considered: 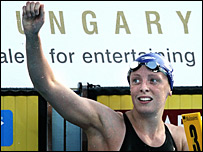 Monty Panesar (pictured above), became a cult hero to lift England’s sagging Ashes-winners back to winning ways after making Test debut in India in March

Swimmer Kirsty Balfour (pictured left), winner of a 200m breaststroke silver medal for Scotland at the Commonwealth Games and went on to win European gold later in the year

For more on the arrangements for this year’s Sports Awards, click here

And click here to find out how to join the SJA