Nancarrow, known as Norm to his mates, has kept us entertained with his ‘Diary of a Marsden runner, age 55’. Well, on Sunday, Norm put his best feet forward, forgot his dodgy knees, shrivelled kidney and seized-up back and achieved what he set out to do.

Here is his final update

So that’s it. After a three-month slog of training, niggling injuries, revolting energy gels and NO beer, I finally ran the London marathon.

On the Thursday before the event I didn’t think I would make it to the start line, let alone the finish.  I got out of bed and tried to bend over only to find my lower back had seized up. I couldn’t even touch my knees, let alone my toes. 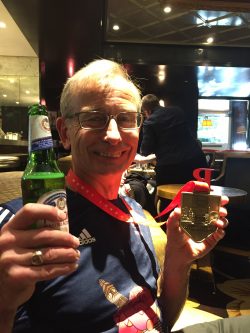 After saunas, hot tubs, stretches and back exercises for three days, it relented sufficiently for the big one – although I felt it for every one of more than 44,000 steps.

What training doesn’t prepare you for is the sheer number of runners. I twice I had my ankles clipped from behind, people run into you (especially near the end when some are really struggling) or just stop right in front of you.

You rarely get anywhere near the blue line marking the shortest distance. My GPS watch said I actually ran 26.82 miles.

There were some tough moments but I did what I set out to do, which was to run every step of the way and get my medal. And I will never forget that feeling running in front of Buckingham Palace and down The Mall to the finish line. 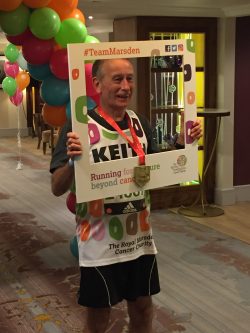 But the best news is we’ve smashed my pledge of £1,500 for the Royal Marsden that started this whole crazy journey.

Many thanks to the 81 people who have coughed up so far and there’s still time to join them at http://uk.virginmoneygiving.com/KeithNancarrow