NORMAN GILLER has always had friends in high places, but this week he celebrates the elevation to the House of Lords of his football reporting mate, Michael Grade

I was watching BBC2’s Daily Politics when the news broke of Michael Grade’s elevation to the House of Lords. Just as memories came back of how we used to report football together from the same press box, I was astonished by one of the most savage attacks I have ever heard on daytime television.

Peter Oborne, the Daily Telegraph’s acerbic chief political commentator, was a studio guest and this was how he reacted to Michael moving to the House of Lord’s:

“I think Michael Grade is a disgrace to himself and he will now become a disgrace to the House of Lords and to the Conservative party … He behaved quite disgracefully as Chairman of the Board of BBC Governors when he left after two years for a high-paying job in the private sector. I think if you’re going to the Lords you have to have a record of public service and to leave a great public sector job, to be the inheritor of Lord Reith and to piss off after a few months in the job, to coin a phrase – that is very low-grade behaviour.”

That’s the trouble with Oborne. He always sits on the fence.

This would have been powerful stuff even after the watershed.

The Michael Grade I have known since long before Oborne went to Sherborne School and then Cambridge would certainly not come into the “disgraced” category.

Since he left his job as a sports columnist on the Daily Mirror in 1966, his roles have included director of programmes at LWT, president of Embassy TV in the United States, controller of BBC1, chief exec at Channel 4, head of First Leisure, Pinewood Studios chairman, Camelot chairman, chairman of the BBC Board of Governors, head of ITV and, just last month, he headed the group that bought four of London’s leading theatres from Lord Lloyd Webber.

Grade has been a life-long fan of Charlton Athletic, where he was a director, although he has also been spotted in the cheap seats at Stamford Bridge on big European nights.

It has obviously helped Michael that he comes from one of the most prominent and powerful of all show business families. His late father, Leslie, and his uncles Lew Grade and Bernard Delfont were the three brothers who ruled British entertainment for four decades.

But those who say he “made it” only because of his family connections do not know Michael. He has always been his own man, and has the charm, the charisma, the cunning and the (good old Jewish word coming up here) chutzpah to negotiate any deal.

I wish I could call as a witness our old mutual mate John Bromley, much mourned and much loved legend of the SJA who guided Michael through his early grounding as a sportswriter on the Daily Mirror.

They used to write a Charlie Sale-type column called Sportlight. It first appeared as “By John Bromley”, until crusty old Mirror mouthpiece Peter Wilson complained and it was changed to “Edited by …”. Brommers wanted to gag Wilson. 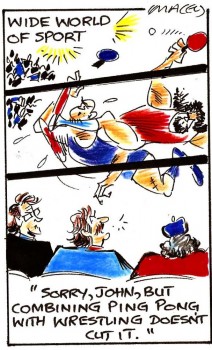 Michael reluctantly gave up his sportswriting career when his father suffered a stroke, and he went into the family business … while Brommers was building a mushrooming career in television at London Weekend, where he introduced World of Sport.

It was originally called Wide World of Sport, until John had to concede that ping pong from Pontypridd, darts from Dartford and wrestling from Watford did not quite fit the category “wide”.

Brommers and I served our reporting apprenticeships with the same group of papers in east London and Essex, and I followed him on to the Daily Herald after the staff shuffling caused by his switch to the Mirror.

Grade and Brommers were the central characters in one of my rare exclusives when I was writing a sports TV column for the London Evening News. The pair of them – powerhouses at LWT – had hatched a plot to steal Football League coverage from under the noses of the BBC.

I was tipped off by another ex-Daily Herald and Mirror man, Sam Leitch, the former dynamic boss of BBC Sport, who described the takeover as, “Auntie has been caught with her knickers down.”

My closest friend in the business, commentator and all-around-gentleman, Brian Moore, reluctantly confirmed the story. “For goodness sake don’t quote me,” he said. “It’s true. Michael and Brommers have pulled off the coup of the century.”

The Football League agreed to sell out to ITV in what was then a huge £5 million, three-year deal, and the Evening News headline written by sports editor Peter Watson summed it up perfectly: Snatch of the Day.

The BBC went crying to the Monopolies and Mergers Commission, who blocked the move but allowed the compromise that ended up pleasing no one, allowing ITV to take over the Saturday night slot on alternate years from the 1980-1981 season. Michael Grade had pulled off the deal when he was just 33.

To this day, Michael refers to Brommers as “The Commander”.

I know exactly what John would say on the news of Michael’s elevation to a peerage: “Good lord …”

All SJA members who knew Brommers will understand why I close with a joke that he made his own. I must have heard him tell it a dozen times, because it became a ritual that he always told it to any gathering where liquid was flowing – which meant most gatherings involving the unforgettable Brommers:

The landlord leans across the bar and says: ‘My advice is don’t eat the pie’.”

You needed to hear it from Brommers. He used to laugh uncontrollably with every telling of it.

Perhaps Lord Grade could tell it at his investiture. I wonder if he will take the title, “Lord Grade of the Valley”?