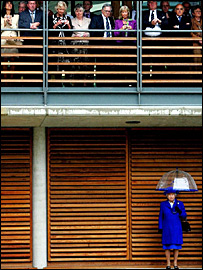 Centre at Roehampton where the Lawn Tennis Association aims to provide a central focus for tennis in Britain and for performance players and clubs.

It was ironic that LTA president, Stuart Smith, had to make his speech of welcome from under an umbrella – the rain would have prevented play on the 16 outdoor grass, acrylic and clay courts.

But on the six indoor courts, it was business as usual with players going through their paces when the Queen toured the facilities.

Every important surface for tennis is

offered at the NTC and Britain’s Davis Cup team, which faces The Netherlands at Birmingham on April 6-8, will use the NTC indoor courts for their preparations.

The LTA has moved its operations from West London as the long-term plan to develop a national centre has come to fruition.