Student SAM FRANCE is studying the NCTJ Diploma in Journalism with News Associates, run in conjunction with press agency Sportsbeat, and he was on reporting duty at the SJA British Sports Awards sponsored by the National Lottery.

Sam Curran believes England’s cricketers could make it a golden summer in 2019.

The 20-year-old , who won the Peter Wilson Trophy for international newcomer at the SJA British Sports Awards, burst on to the Test scene in a series draw with Pakistan before victories over India and Sri Lanka.  The World Cup and Ashes are on offer next year and confidence is high.

“We’d like to think so,” said Curran, when asked if England could win both. “The one-day team is flying at the minute, they’re a very strong team, and the Test boys are getting some good momentum as well.

“So fingers crossed we have a good season and a good winter in the West Indies and you never know, hopefully at the end of next summer we’ll be looking back on two big victories.”

With a Test batting average above 36 and a bowling average around 25, Curran has made a hugely promising start to his England career. An Ashes Test on home soil at the Oval beckons.

“I don’t want to look too far ahead but definitely that’s one of my aims,” he admitted. “But the main thing is trying to get in that first team for the first Test and then hopefully kick on.”

England tour West Indies in the New Year and it presents an opportunity to build on a rare series away win in Sri Lanka, which came at the end of a year of progress for England.

“[I’ve got] about two weeks off just seeing family and friends and then obviously Christmas is about relaxing, then it’s straight to the West Indies, so I’ll be back in training in the next week or so,” Curran added.

After a year which saw him bat and bowl his way into the hearts of England fans, he reflected on his accomplishments.

He said: “It’s been a whirlwind, I’d never have thought this would have happened at the start of the year.”

Alec Stewart sees captain Joe Root’s fingerprints all over the current successful England side and thinks that is why they are favourites to win a home World Cup and the Ashes.

A drawn Test series with Pakistan, followed by wins against India and Sri Lanka, is all the proof  Stewart needs..

“They’re showing that they’re a squad that is growing, evolving, and as well as the white-ball squad have done under Eoin Morgan, I think we’re seeing the Test squad grow as well,” said Stewart. “Joe Root is now being seen very much as the leader of that group.

“It was always going to be a little bit hard for him when he took over from Alastair Cook with Alastair still in the team. Now he can really get his fingerprints all over it and mould it in the way he wants to.”

England must first negotiate a tour of the West Indies, before returning home for a World Cup that Stewart thinks England should be aiming to win.

“I always say don’t enter a tournament or a series if you’re not confident,” he said. “But because they are making progress in all formats, it could be a very exciting 12 months ahead.  They should start as favourites to win the Test series in the West Indies.

“The World Cup, they will start as favourites or joint-favourites, I’d suggest.  And then the Ashes, it’s going to be a great contest. Australia have had their well-documented issues.

“I’m sure they will bring back the three banned players, or certainly  (David) Warner and  (Steve) Smith will come back, so that will be a challenge but again I’d suggest that if we’re sat here again next year we’ll be saying how well England have done in all formats.”

Curran took the cricketing world by storm in 2018 and even Stewart, who has watched Curran since his junior days, admitted to being taken aback by his progress.

“He was always going to be a top player, don’t worry about that. From when I first saw him as a 14-year-old, he was a standout for his age group and he took to playing for Surrey straight away. Each level he’s gone up, he has stood up and performed.

“So when he took his chance in the summer… I won’t say it didn’t come as a surprise, it surprised me just how well he’s done, how settled into that environment he has become. There’ll be tough times ahead, as there always are for any player, but what he’s done so far we can only applaud and say well done.” 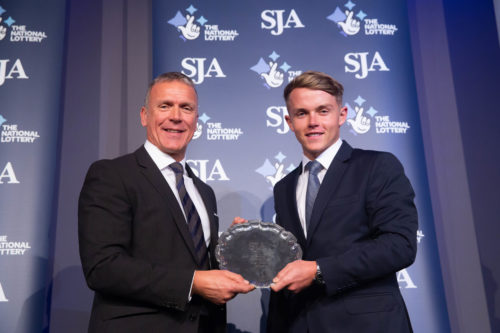 Former world champion modern pentathlete Samantha Murray wants a role in the media now that she has retired.

The 29-year-old, who won an Olympic silver medal at London 2012, admitted: “I’d like to become a sports presenter with TV in the future, and definitely I’m going to stay in touch with pentathlon and follow the competition circuit.

“I’m going to hopefully start working in a mentoring role for athletes across the country.”

Murray has done presenting work for the BBC and ITV, and has talked about taking a journalism course. She also marries next summer, another major change as she adjusts to life after athletics.

“It’s fantastic,” she added. “It’s great to get involved with lots of new opportunities, say yes to new things, and try to understand what steps I’d like to take next into a new industry and life.

“Also it’s been great to give back to family and friends, and volunteers who supported me throughout my sports career.”

Murray was at the British Sports Awards to present the Pat Besford award for outstanding performance of the year to Lizzy Yarnold, Britain’s most decorated athlete in the Winter Olympics.

Yarnold confirmed her retirement from skeleton in October and announced that she is pregnant.

“It was an honour to present the award to her,” Murray said. “I watched Lizzy train her way to double Olympic gold and I know what a fantastic person and athlete she is, and I love what she represents.”

England cricketer Tammy Beaumont is backing the bid to include women’s cricket at the Commonwealth Games in Birmingham. The ICC recently submitted an ECB-backed bid for a Twenty20 tournament to be part of the programme in 2022.

“As an athlete, as a cricketer, it would be amazing to be part of a Commonwealth Games,” Beaumont said. “It’s something I’d fully back from the ICC and the ECB. I think it would be brilliant to be part of it and get women’s cricket on a wider stage than it is at the moment.”

Tthe 27-year-old is delighted about the successes of English women across all sports in recent years.

“You only have to look at the last three years,” she said, “And it’s just gone through the roof with the hockey girls, the netball girls this year, us, and hopefully the football girls will do something amazing at the World Cup next year. Women’s sport is just going through the roof in this country, it’s a really exciting time.”

There has been one blot on the landscape, however, a reminder that gender equality has a way to go. The world’s best female footballer, Ada Hegerberg, was asked if she knew how to twerk as she received her Ballon D’Or.

“It’s quite disappointing that a women’s footballer who is quite clearly world class in her own right got asked a question like that,” Beaumont admitted. “Unfortunately that’s still the way it is. We’ve come a long way in terms of professionalism and the way that people see women’s sport, but unfortunately there’s still a little way to go.”

The former PE teacher of Geraint Thomas and Gareth Bale was glued to the television as his old boys  confirmed their status as sporting greats.

Steve Williams, a teacher at Whitchurch High School in North Cardiff, was honoured at the SJA British Sports Awards with the JL Manning Award for services off the field of play. Gracious and humble, Williams was keen to share the plaudits round the school.

He did  reveal, however, that  Tour de France winner Thomas livened up  school life.

“I remember one day we had a staff training day and the head was speaking and of course we all had our phones on,” Williams said. “Nobody was listening to what was going on, we were watching the Tour de France!  We’ve followed his career, but not like this time. We were glued to the television.

“I would never watch the Tour de France for three or four hours previously, I’d watch it for moments to see how he was getting on, but this time we felt like we had to live the moment.”

Williams was at Cardiff’s Millennium Stadium as Bale’s Real Madrid beat Juventus in the previous season’s Champions League final, and watched from afar as he scored one of the tournament’s greatest goals to blow Liverpool away this year.

He said: “I don’t think there was anybody who, for that moment, wasn’t just stunned. ‘Did he really do that?’  And then of course the place just erupted. It’s one of those defining moments in sport. You don’t see them very often, when somebody does something quite extraordinary.

“That’s what puts Gareth in amongst the world’s best, moments like that. He’s a tremendous player all round but you just think ‘how did that happen?’ Even on the training ground, let alone in a match like that at the highest level, it’s just unbelievable. He’s had those moments quite often, really!”

Williams , who also taught former Wales and Lions captain  Sam Warburton, dismissed suggestions that he could be seen as a Welsh sporting legend too.

“I don’t know about that! It’s all very nice, I think you have to look upon it as you accepting this on behalf of everybody else,” he said. “There’s a lot of PE staff, a lot of staff in school and they’ve all had an input.

“It’s a whole mixture of things; parents, the school environment, PE teachers. To be singled out is great but let’s not fool ourselves!”

News Associates was named the UK’s number one ranked journalism school for the fourth straight year by the National Council for the Training of Journalists. Their sports course runs in conjunction with press agency Sportsbeat – more details visit: http://newsassociates.co.uk/our-courses/nctj-diploma-multimedia-sports-journalism-35-weeks/