We are delighted to announce that The SJA, in association with the National Lottery, is once again gathering in person to celebrate the successes and achievements of the British sporting year.

The awards which were first held in 1949 will honour the Sportsman, Sportswoman and Sports Team of the year as well as the many other sporting achievements of 2021. 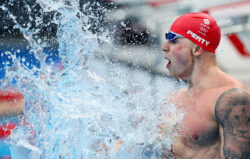 The awards lunch will take place at The Brewery in Central London on Thursday 2 December.

The event starts at 1200 with a welcome reception, followed by lunch and the Awards hosted by Jim Rosenthal, the awards are expected to finish at 1600. Tickets are available for individuals, groups and tables of 10.

You do not have to be an SJA member to attend although members are entitled to a significant discount on tickets.

Last year was the first year since the awards began in 1949 that journalists, athletes, and people from across the sports industry were not able to meet in person and we held the awards via a virtual ceremony.

This year we are pleased to be back to a more traditional British Sports Awards and are looking forward to seeing colleagues and friends once again.

The members vote for sportsman, sportswoman and sports team will open in a few weeks, all members will be contacted and asked to cast their votes online.

Follow the link below for more information about the awards (www.TheBritishSportsAwards.co.uk) and to purchase tickets.