LONDON CALLING: Following the Games has been a marathon, not a sprint for NORMAN GILLER. He has the Olympic rings around his eyes to prove it. PLus another page from KEVIN MACEY’s sketchbook

With the greatest sporting festival of my 70-something lifetime approaching its climax, we can dare to start patting ourselves on the back for a job well done.

Cynics and pessimists (I was in their club) feared terrorist atrocities, traffic chaos, public apathy, widespread drug cheating, disruption by striking unions and failure by the British team to better what they achieved in Beijing.

Wrong on all counts, which wins me a place of dishonour in the Michael Fish School of Forecasters.

For we SJA members, there is an impossible job approaching when we are called on to name our Sportsman and Sportswoman of the Year.

You would have thought it was nailed on for Bradley Wiggins when he added an Olympic gold to his historic Tour de France triumph. But then Sir Chris Hoy won his record-setting sixth gold medal, and just suppose Mo Farah adds the 5,000 metres gold to go with his 10,000 title? Or Andy Murray adds the US Open to his Wimbledon final and Olympic tennis gold? And how about Ben Ainslie, officially the most successful Olympic sailor in history?

For me, Wiggo is out on his own but history shows we have a habit of selecting athletes, particularly in Olympic year: 1956 Chris Brasher, 1960 Don Thompson, 1964 Lynn Davies, 1968 David Hemery, 1980 and 1984 Seb Coe, with rowers Steve Redgrave and Matthew Pinsent dominating the awards for three Olympic years, and then Chris Hoy lifting the award in 2008.

We all thought it was impossible to look past Jessica Ennis for the women’s title following the clinching of her heptathlon gold on that astonishing Super Saturday, the most continuous session of sports grandeur I have ever experienced.

Jessica achieved everything expected of her under the red-hot glare of being the nation’s favourite and the Face of the Games. A walkover for Sportswoman of the Year we thought, and then out of the blue comes 20-year-old Laura Trott, a double gold medallist in the velodrome and with a life story that a Mills and Boon writer would struggle to invent.

If we are going to award the title for the smile of the Olympics it would have to go to Nicola Adams. I have mixed feelings about women’s boxing, but she is such a fine technically correct boxer and so charismatic that how can you not be won over? She made ring history when becoming the first women’s Olympic boxing champion, and after collecting Great Britain’s  medal  No 51, provided a truly golden smile to go with it.

How are we going to get all these champions into our awards lunch on December 6? It will be the hottest ticket in town. 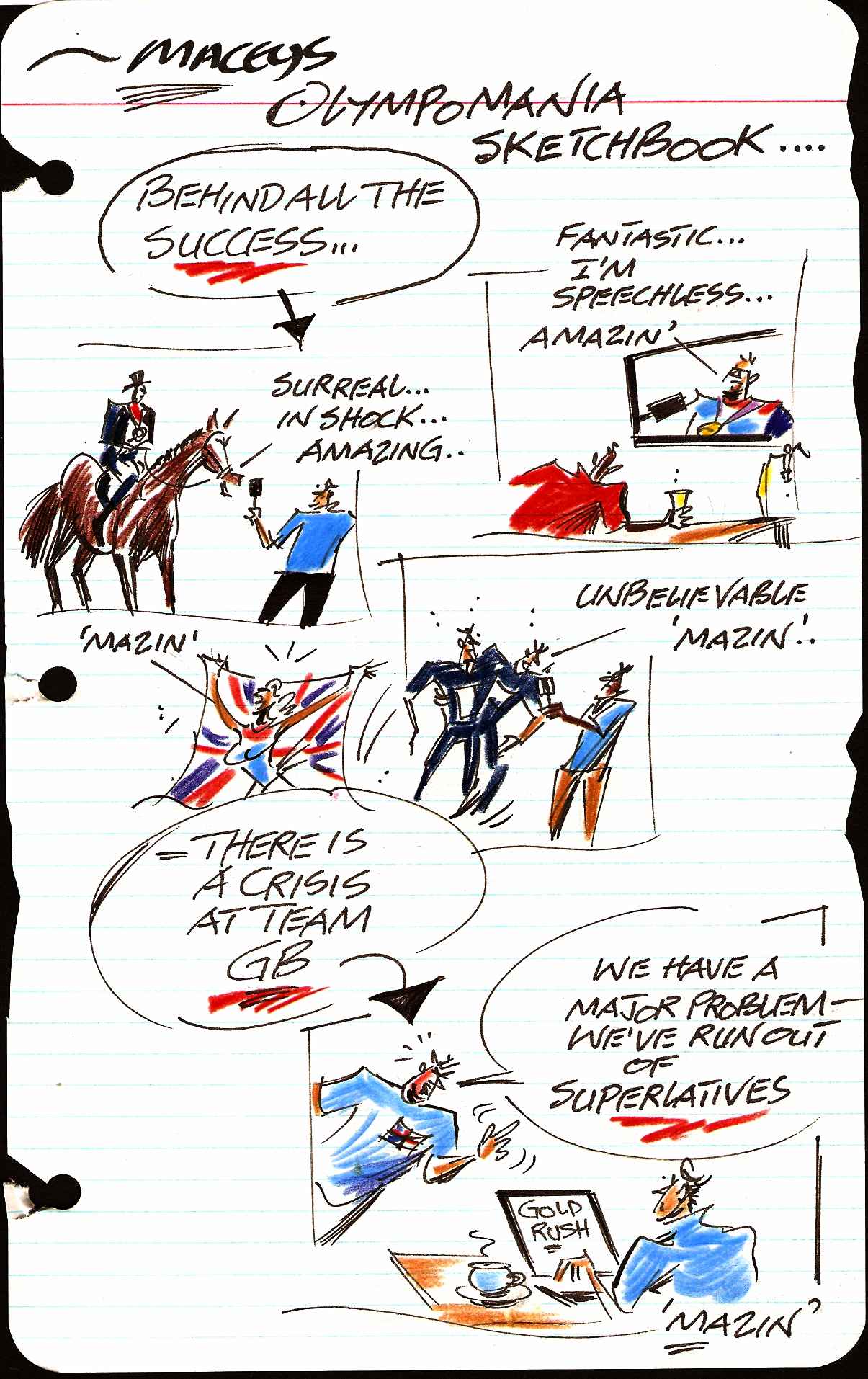 I AM nominating myself for a medal as most committed spectator of London 2012. Or I suppose “viewer” is a better description.

I have been watching non-stop the BBC’s blanket coverage on two TV sets side by side in my lounge, and tuned into a third programme on my mainframe computer. This explains the Olympic circles under my eyes.

Then, on my laptop, I am continually conversing on Twitter and Facebook, and getting into daft and often dirty arguments with keyboard warriors who for some reason take delight in knocking the efforts of the committed and dedicated Olympic competitors.

There is something about Twitter and Facebook forums that bring the worst out of people. The twerp who piled misery on Tom Daley in his lowest moment was arrested and warned.

The arrest was over the top. Just name and shame is the way. If the anonymous screen assassins know there is the chance they will be identified, it will make them think twice before being vile and abusive with their comments.

I am continually being asked what I consider my personal highlight of the Games. I doubt if I will ever see an hour to match the Ennis/Rutherford/Farah gold rush, but for me the outstanding memory will be outside the stadium on my visit to the Olympic Park.

The sight of families and children’s faces shining with excitement and anticipation revealed that the Games really can and will inspire a generation. It made an old man very happy.