HILDA OGDEN stands in this week for Norman Giller, for whom watching every kick of the 2014 World Cup in Brazil so far is beginning to take its toll. They both hope that by the end of tonight, England’s Wayne Rooney isn’t tearing out his transplanted hair.

I have always believed the 1970 World Cup finals as being the greatest of all the tournaments, probably because I was there and felt part and parcel of the spectacular football feast. So perhaps my opinion will carry some weight when I say the early indications are that the 2014 finals in Brazil are going to be even better. 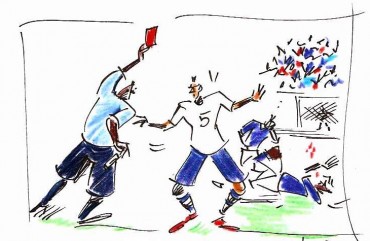 A major difference, of course, is that host country Brazil are not a patch on the Pele-propelled 1970 champions, but there is still time for them catch the magic of their ancestors.

Thanks to the wall-to-wall coverage by BBC and ITV I have not missed a single kick, and so far only the Iran-Nigeria goalless bore has been sub-standard. The Brazuca-shaped rings under my eyes are testimony to my commitment to watching every match.

This is the first World Cup since 1958 when I have not been involved in some way or the other, from reporting, sub-editing, TV backroom work, video producing or book compiling. Sofa so good.

I think the spirit in which Brazil play the game has dug into the bones of all the players. By contrast, the 1966 finals were the most mean-spirited and physical of all the World Cup tournaments I have witnessed. I much prefer the free-spirited football as delivered by Holland and Australia in yesterday’s gripping group match, for example.

Sad news for all my old football-reporting brethren on duty in Brazil is that they are generally being outwritten and outwitted by the army of online amateurs who are interested only in propelling their opinions across the ether. 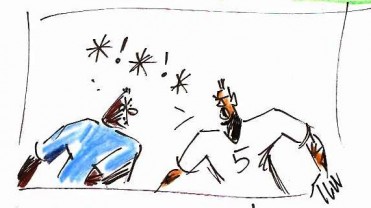 As I have said before, we are no longer a nation of readers, but now a nation of writers. Every major incident during the World Cup is triggering an astonishing 250,000 tweets a minute. Even at the 140-character restriction, that’s a lot of words being spilled about the greatest football show on earth.

You have to beware what you say online. Top of the head, I posted during the Brazil-Croatia match: “If that was a penalty, I’m Hilda Ogden.” In no time that was what my followers were calling me on Facebook and Twitter, and doctored photos quickly followed of me in Hilda’s curlers.

There are those convinced Hilda knew more about the game than I ever did. What a load of Brazucas.

At least the football reporters in Brazil are getting their news and views into print. It is a long-forgotten fact that for much of the 1970 World Cup Fleet Street was shut down by a printers’ strike, and a young Australian newspaper baron called Roop Murdoch decided there and then that he would bring the print unions to their knees. 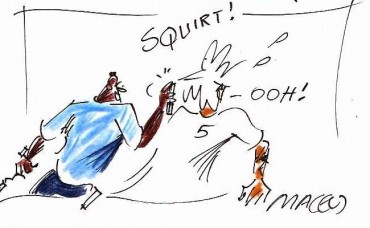 It was as frustrating as trying to play the piano with the lid closed, but at least I had an outlet in the Scottish Daily Express that was not dragged into the wage war. It meant the Scots giving banner headlines to England’s endeavours, but they enjoyed their moment of, uh, independence.

Many online spend as much time critiquing the television commentators and pundits as they do the football. The computer keyboard seems to have a magic ingredient that turns people into omniscient beings. They suddenly seem to know more about tactics than any manager, can play the game better than any pro, are expert commentators and more knowing than any pundit.

Many moons ago I was given a trial as a radio football reporter. It was so long ago that  Juke Box Jury, with its celebrity panel declaring new records as “Hits” or a “Miss”, was still a popular programme. When I finished my trial run in the BBC Light Programme Sports Report studio, four of my senior Fleet Street colleagues – Brian James, Ken Jones, Peter Lorenzo and Clive Toye – jokingly raised hastily written “MISS” placards.

I failed the trial because while describing a goal I managed to sound like Minnie Mouse. Sports Report guru Angus Mackay told me bluntly: “Sorry young man, come back when your voice has broken.”

If Angus had been in charge of BBC’s 2014 World Cup coverage he would have given Phil Neville and Robbie Savage trials before they were let loose as co-commentators.

To Neville, he would most likely have said: “Sorry young man, come back when you are less like the Speaking Clock.”

To Savage: “Sorry young man, come back when you can talk a better game than you played.”

Phil and Robbie have been savaged online, but they have earned my respect for being able to laugh at the crushing criticism coming their way.

I have heard little laughter coming from the ITV camp, where they are taking a hiding from the BBC, whose coverage is superior in every way.

A bow in the direction of Gary Lineker, who has at last started to reach the standards set by his old mentor Des Lynam. There can be no higher praise.

Adrian Chiles is not in the same class. “Sorry young man, come back when you are giving us less of the last of the summer whine.”

THE SHOULD-HE-SHOULDN’T-HE-PLAY obsession with Wayne Rooney has now entered the halls of hysteria, with every Tom, Dick and Harriet having a view, even though most do not have a clue about the pressures and pitfalls of World Cup football.

It is nothing new. I remember similar debates going back to Bobby Charlton in 1958, Jimmy Greaves in 1966, and Keegan and Brooking in 1982, to list just a handful of raging team selection controversies.

But because of the online contribution, the Rooney dilemma has become an overheated national issue on which everybody has an opinion.

My two-penn’orth is that Rooney is our best centre forward and it is unfair on him to play him out on the left. Put him in the centre or leave him on the bench, to come on as an explosive substitute.

I notice the football writers on the spot in Brazil cannot agree with each other, so what chance has Roy Hodgson of pleasing everybody?

I just hope Roy gets it right and that England sweep through to the quarter-finals without him reduced to a “do I not like that” moment that will one day earn him a humiliating cider advertisement.

Wonder if I can get a commercial as Hilda Giller?